A colleague recently called my attention to this charming fruitwood token of a Victorian boot, up for auction at Bonham’s. (http://www.bonhams.com/auctions/21835/lot/341/) According to sources, this may well be a wedding or love token. Certainly, the significance of shoes with nuptials is a long standing one, and, on this particular example, the object has the added detail of the heart on the toe. Given the "style" of the wedding boot, with its low heel, "spat-like" toe treatment and the ornamented boot top, it would be appropriate to the mid or late19th century. However, the treen shoes, while giving a sense of their respective time period through styling, wood type and details, are imaginative.

Treen – which literally means "of a tree" -- is a generic name for small handmade functional household objects made of any number of types of wood. Not being too familiar with this type of collectible, I did a bit of searching and found a number of absolutely delightful treen snuff boxes in past auctions at Bonham’s and in museum collections. The use of treen snuff boxes will parallel its popular use, with late 18th-mid 19th century examples. Several are featured below. 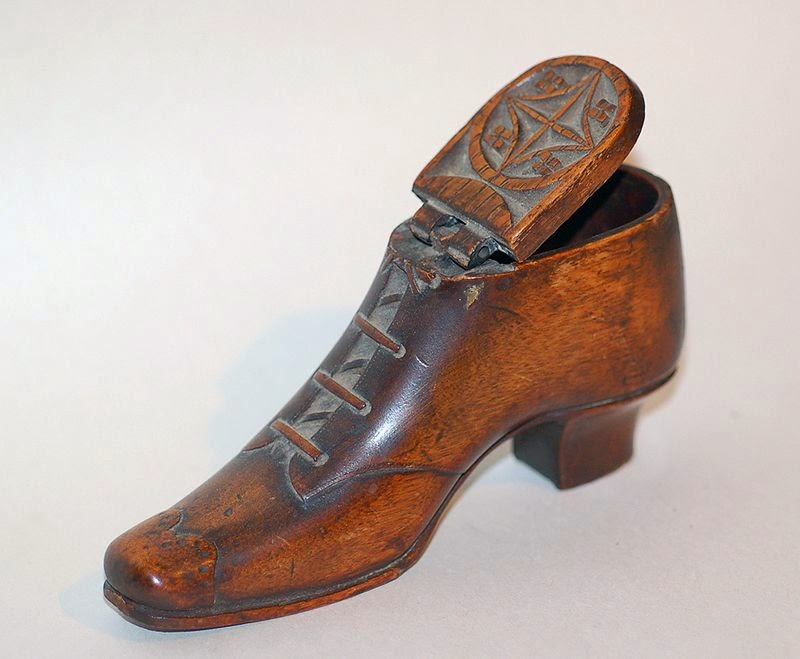 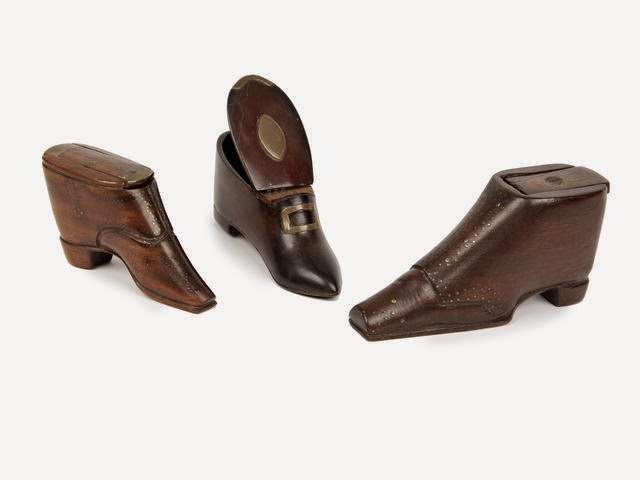 E.H. Pinto (1901-1972) brought scholarly attention to the now highly collectible treen. Pinto began collecting when he was a boy and wrote the definitive book on the topic. The Birmingham Museum & Art Gallery purchased his collection of over 7,000 items in the 1960s.

Thank you to my colleague, James Burrough, Director, The Real Wood Furniture Company, for calling my attention to the Victorian love/wedding token at Bonham’s.
Posted by SilkDamask at 5:19 AM No comments:

A Concealed Shoe on the Cusp of a New a Century 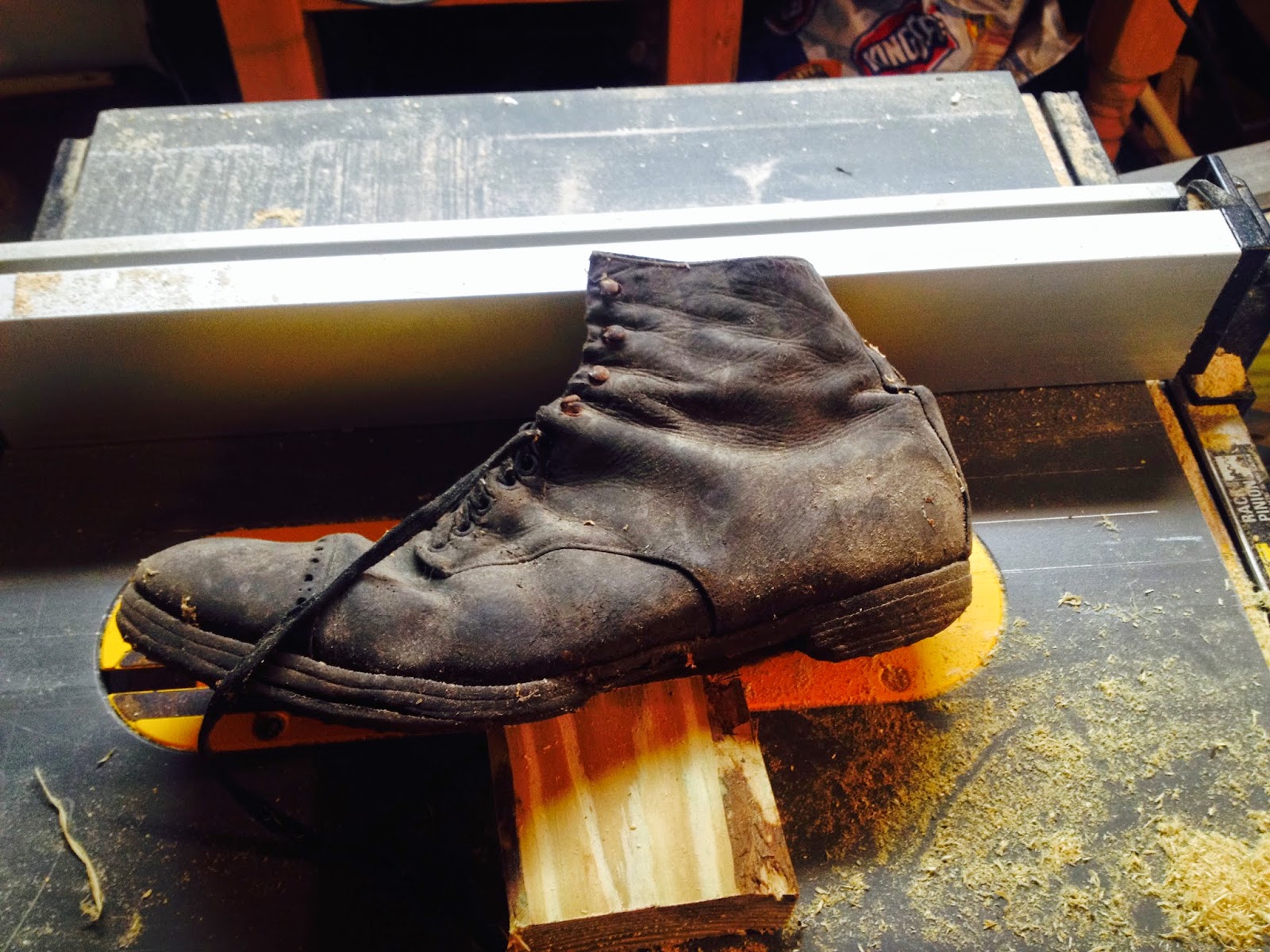 This part of New England, where I live, and  Northampton UK share a rich history of shoe making. The Northampton Museums and Art Gallery maintains a collection of shoes both touted and obscure. The touted shoes can, through elegance or notoriety, elicit an immediate positive response, but what of the obscure shoes, the concealed shoes, the well worn shoes hidden in a wall? Worn shoes have been hidden in the recesses of houses for centuries, a practice designed to protect the house and its inhabitants from evil. As shoes have been discovered some communities have noted their existence and recorded the information. Happily for anyone interested in concealed shoes, the Northampton Museum in the UK keeps an index of concealed shoes from several countries from around the world. The curators compiled a list of categories and attributes of the shoes discovered over the years. It's worth a look at the the whys and where's: http://northamptonmuseums.wordpress.com/2012/06/19/concealed-shoes/ 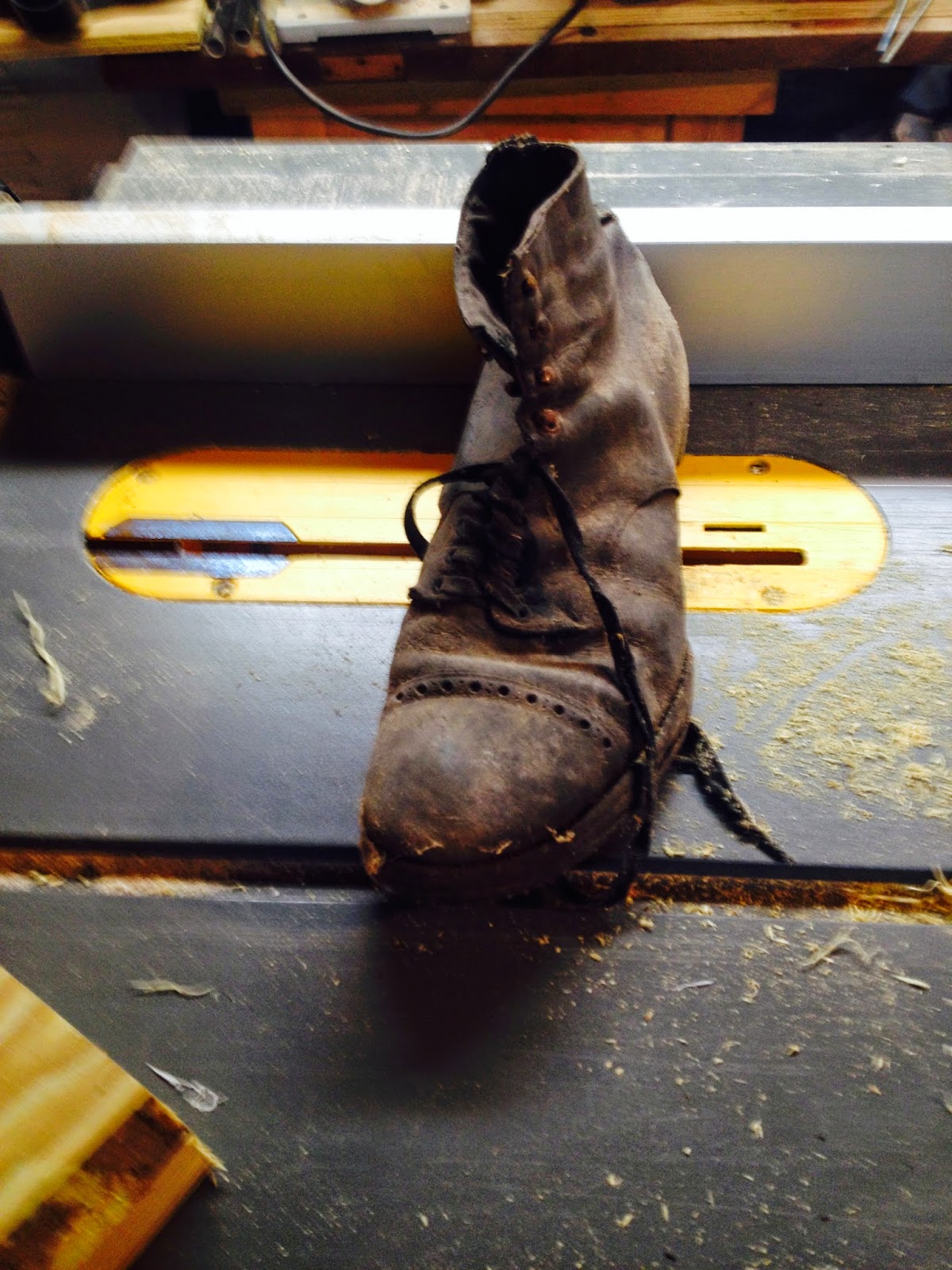 So what does this custom have to do with New England? Well, you never know where a custom may fall. Our house was built in 1914-15 so it’s on the cusp of its centenary. Over the years we’ve removed some questionable bits and added our own. A number of years ago we converted the house from a two-family house to a single-family house. Never a large house, the rental apartment could not fit the larger furniture many people owned, which made our decision a little easier.  One of the tasks was the replacement of the ground floor front door leading to the upstairs unit with a window. Each apartment had its own entrance, so one needed to go. As I removed the door frame from the wall frame a workman’s shoe fell from the space between the studs and hit the floor. Usually these voids have broken plaster keying and bits of wood from the construction, but this time a shoe! 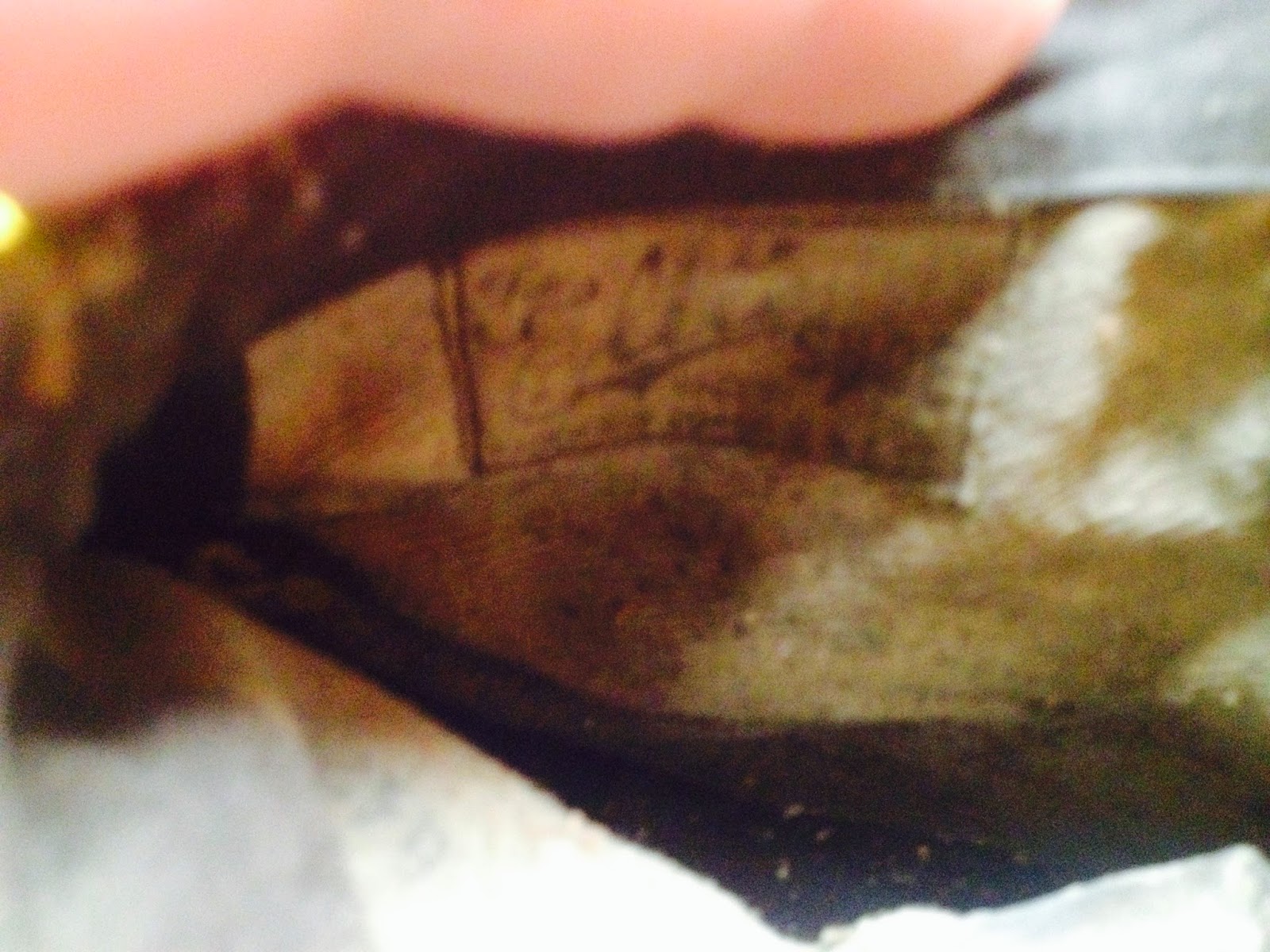 It startled me, as we have never found anything in this house other than what should be--no treasures, no forgotten documents, just a house, which is fine by us. So the falling shoe was the first artifact discovered in the house. When I retrieved the shoe from the floor, I looked inside and there was a label describing the shoe as, “The Elite Shoe” manufactured in Brockton (MA?).  A utilitarian shoe for a working man, with a hint of style provided by the punched leather detail. Did the shoe manufacturer decide this touch make it an elite shoe? We may never know. 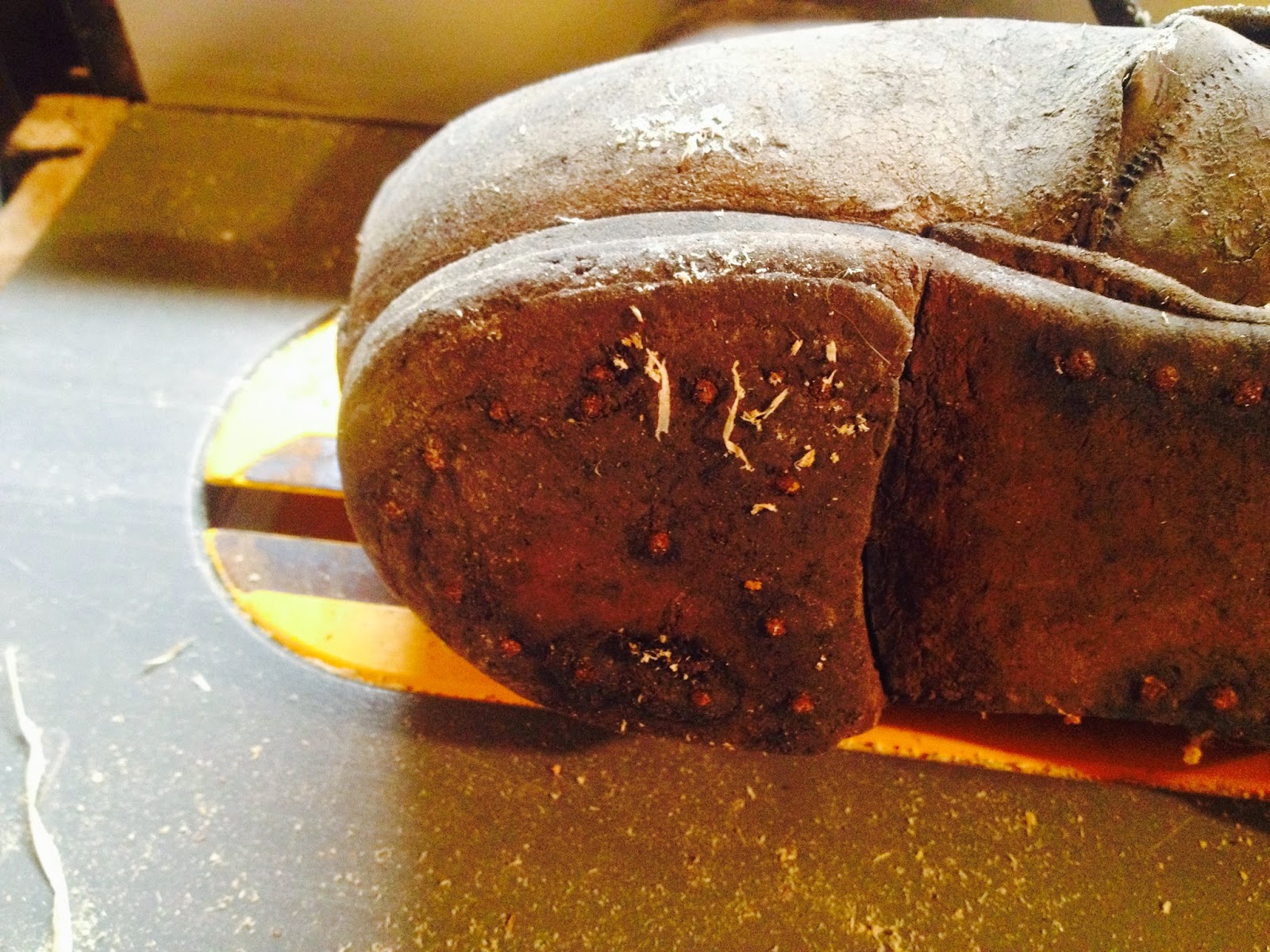 The beauty of the discovery was not the quality of the shoe but the connection it provided with the past. A modern shoe transformed to become part of a centuries old tradition--a good luck token from the builders. It may have been left to protect the house form evil, but how intriguing that it still occurred in the early twentieth-century, not just the fifteenth-century. 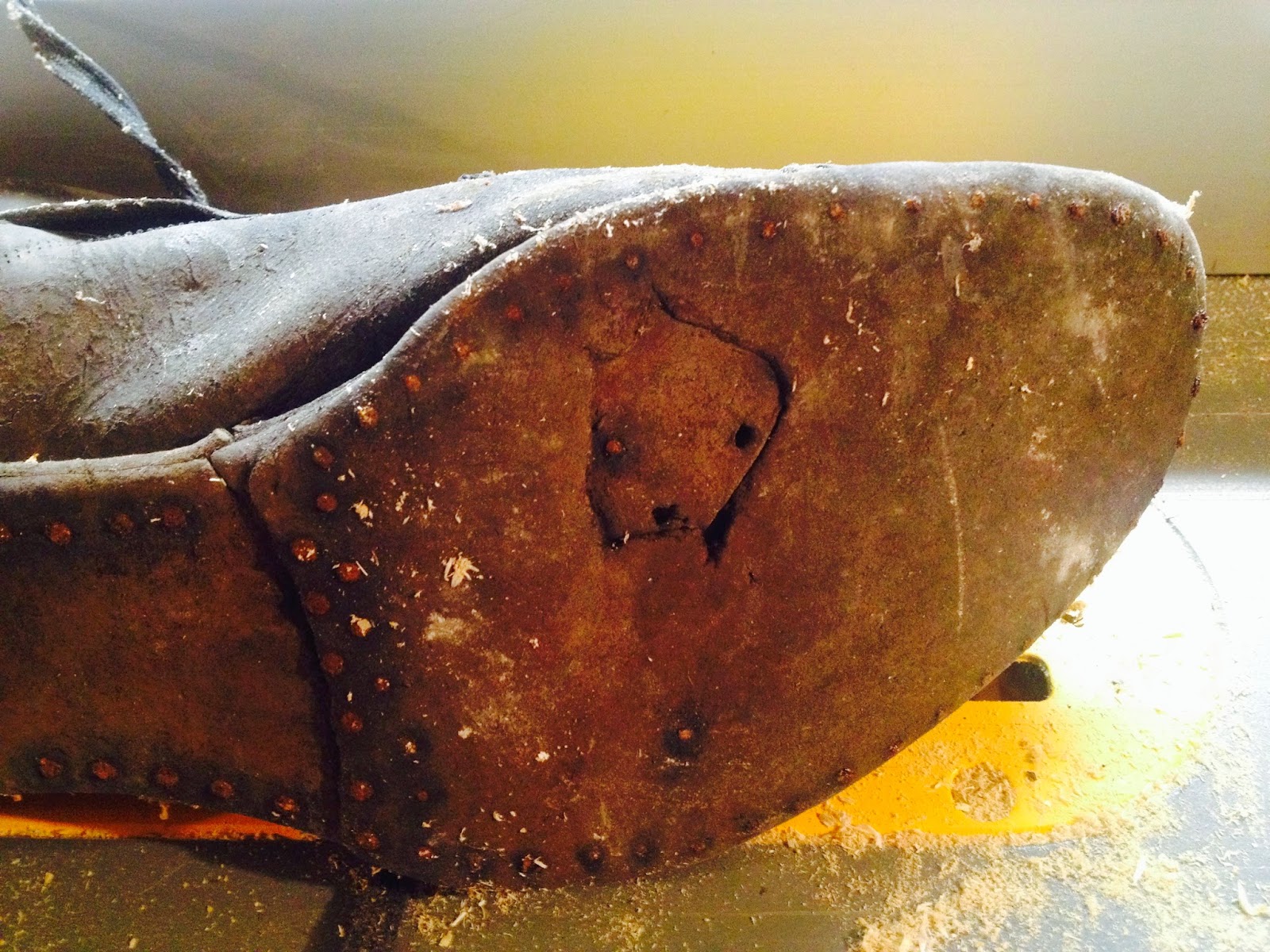 Such a simple, utilitarian and delightful reminder of the power we invest in articles of clothing, which occasionally transcend time and perhaps even space.  For the record another concealed shoe has been found in another old house.

For Your Bookshelf: "From the Elegant to the Everyday: 200 Years of Fashion in Northern New England

If you were not able to visit the exhibition at the Saco Museum, Saco, ME., you can now purchase the publication "From the Elegant to the Everyday…" by Saco Museum Director and exhibition curator, Tara Raiselis. This will be a welcome addition to your library with many little known or never before exhibited costumes, drawn from numerous New England repositories. 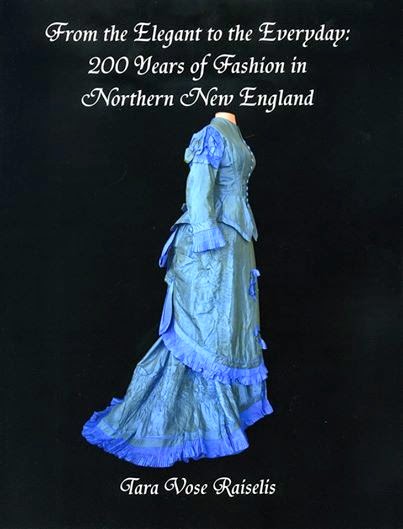 Previous posts on the exhibition include a discussion of Revolutionary War patriot, Samuel Cutts and his suit
http://silkdamask.blogspot.com/2014/03/revolutionary-war-patriot-samuel-cutts.html 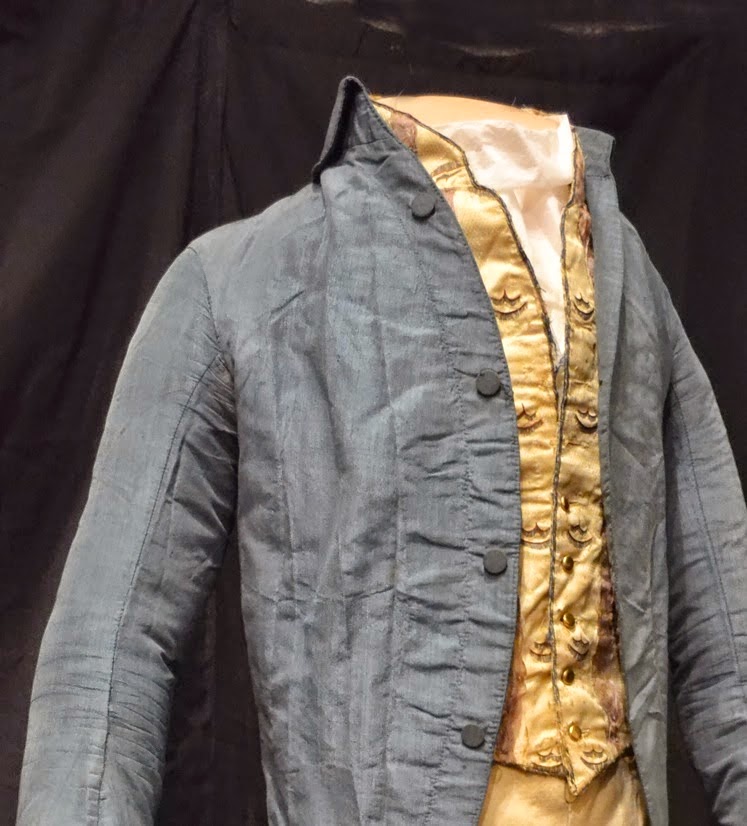 Posted by SilkDamask at 5:06 AM No comments: 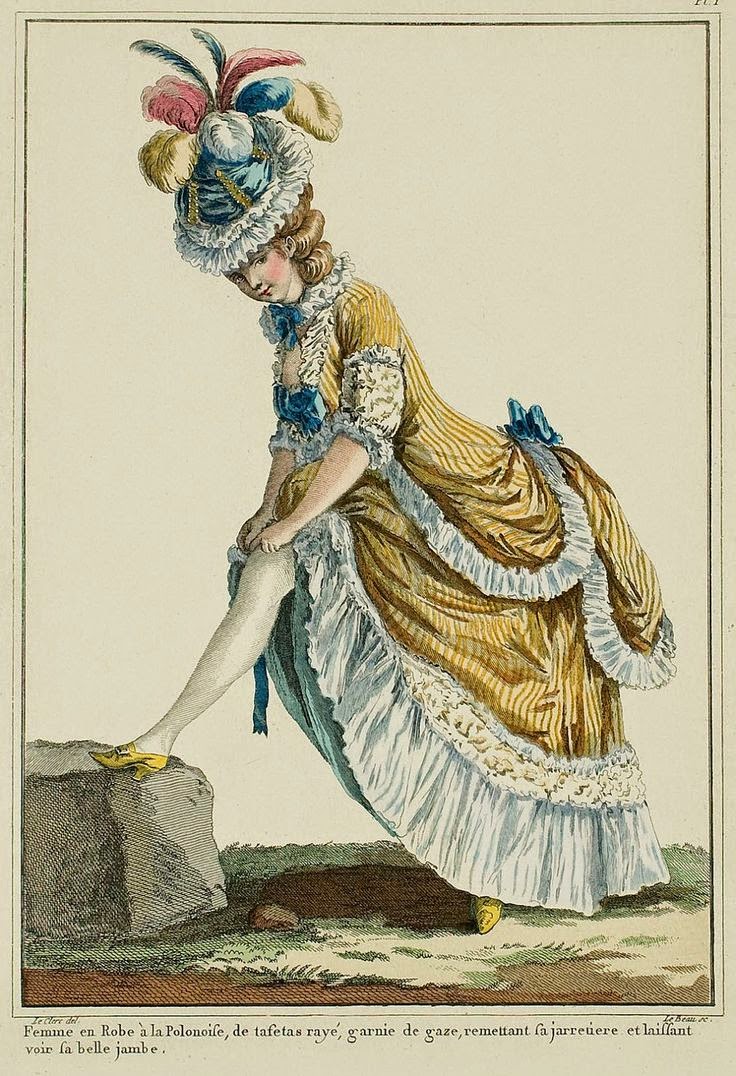 In early New England, the significance of shoes extended beyond function alone.  New Englanders prized, celebrated, and displayed their shoes as markers of fashionable style and genteel sensibility. They also refreshed, altered and revamped them, making repairs as long as the leather was still good.

The exhibition Cosmopolitan Consumption: New England Shoe Stories, held at the Portsmouth Athenaeum, is a rich exploration of New Englanders and their shoes.  We will introduce viewers to lives of figures both prominent and middling, through both stunning and well-worn examples of this significant American accessory.  Viewers will explore the process of how shoes were made, sold, and worn in New England, 1750-1850.

Through the lives and letters of clever apprentices, skilled cordwainers, wealthy merchants and elegant brides, Cosmopolitan Consumption will take us on a journey from bustling London streets, to ship cargo holds, to New England shops and, ultimately, to the feet of eager consumers throughout the region. The “shoe stories” recount a young bride dancing with George Washington during his visit to Portsmouth or a lady attending a ball for Marquis de Lafayette; they trace the fortunes and misfortunes of wearers as shoes were altered to accommodate poor health and changing styles, and finally, they provide glimpse into the shoemaking business of artisans like Sam Lane of Stratham, who sold his shoes at Market Square in Portsmouth. This rich shoemaking heritage continues today. We ask our viewers to consider how these fashionable shoes reveal the hopes and dreams of New Englanders.

The “shoe stories” will be told via approximately 25-35 pairs of shoes, pumps, and mules from numerous local, regional and private collections. Many of the shoes have never before been on display, making this a destination exhibition.

An active program series is planned, including gallery talks, special lectures by leaders in the field, a “shoe shopping” event and hands-on workshops. Funding is currently being sought for a catalog and conference. The opportunity for community outreach and engagement at all age groups is especially strong.

Held at the Portsmouth Athenaeum (www.PortsmouthAthenaeum.org), Portsmouth, New Hampshire, the exhibition will open on Valentine’s Day, February 14th 2015 and be on view through late May 2015.