Did Mr. Darcy Ever Reel on a Sprung Floor? 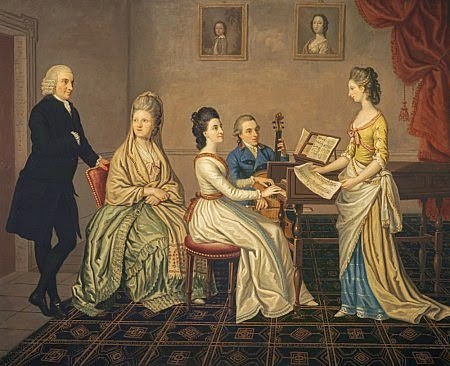 After playing some Italian songs, Miss Bingley varied the charm by a lively Scotch air. Soon afterwards Mr. Darcy, drawing near Elizabeth, said to her, “Do you not feel a great inclination, Miss Bennet, to seize such an opportunity of dancing a reel?” Pride and Prejudice, Austen

After two months of lessons my wife and I attended our first Scottish Country dance this past weekend. We both had a good time and in the tradition of country dancing, we only danced with each other for the final waltz. This put me in mind of several things, which are linked but rarely connected, in part because we are not connected as we once were. 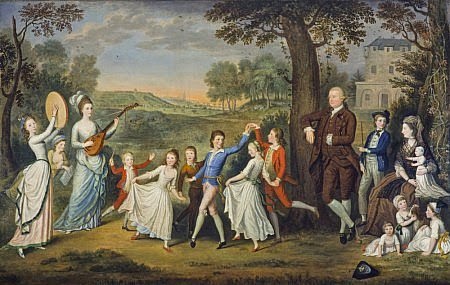 First comes the dance. English and Scottish Country dances are based on ‘sets’ or a dance section of 6 or 8 people partnered as dance couples. Sets can be larger but for the object of this piece these numbers will suffice. The dances are based on two lines that face each other and are usually called the men’s side and the women’s side. The first couple in each set starts the dance. Several more important points, country dancing is done on the ball of the foot, which is why everyone appears to be on tip toes in 18th and 19th century prints, additionally dancers maintain eye contact and smile throughout the dance. It is also essential that partners change with each dance, so you meet everyone in an evening. This is why dancing with the same partner throughout the night sent a clear message at a dance in the 18th and 19th centuries. With the right partner, a reel has the potential of being very flirtatious.

Rowlandson's caricature of a dance 1790s

As quoted above, Mr. Darcy invites Elizabeth to reel, but she declines. This invitation is often seen as a sneer from Mr. Darcy and probably is for Austen readers. However, now that I have danced several reels reasonably well and several that ended in disaster, I can attest to their charm when all goes well! Reels are quick step dances that weave 3 dancers in figural patterns of eight. In the simplest reel the each side reels to its own side, but in a crossover reel the first couple cross the dance floor and reels with the opposite sex. The intertwining dancers follow one another and pass each other looking straight into each other’s eyes as they reel, giving the men a chance to display fancy footwork and the women a slight leap and movement of the shoulders. Elizabeth goes on to answer that she did not wish to say yes and disappoint herself with his further refusal.  However, the unspoken aspect may have been the understanding of this flirtatious aspect, which was not where Elizabeth wanted to go. 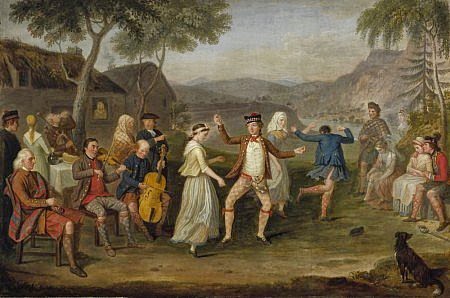 By Austen’s time country dancing was on the wane and in the case of Scottish country dancing it would take until the 1920s before country dancing was recorded and in essence revived.  The waltz and larger social dances took the place of the country-dance. However, an interesting aspect of the quote is that the events are taking place in a country house not at an assembly. People danced in small groups in houses, not just in large assembly balls.  These dances require practice, not just to learn the steps, but to learn how to step, hold the hands, the arms, and to turn etc. It is no wonder that dancing schools existed.  English and Scottish dances evolved separately, both were influenced by French dances and techniques and by each influenced the other. 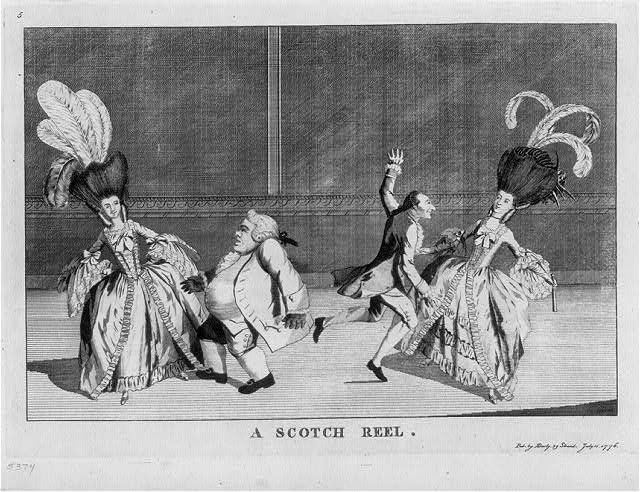 By the 1770s Scottish dances migrated south of the border as the image from 1776 illustrates. The satiric jab strikes at both the perceived roughness of the Scottish dance and the all too exquisite nature of the English dancers. Both England and Scotland created country dances, but one of the differences seems to be the athletic nature of the Scottish footwork, not that English dancing is bereft of intricate work, just the extra physicality and bounce in Scottish dancing. 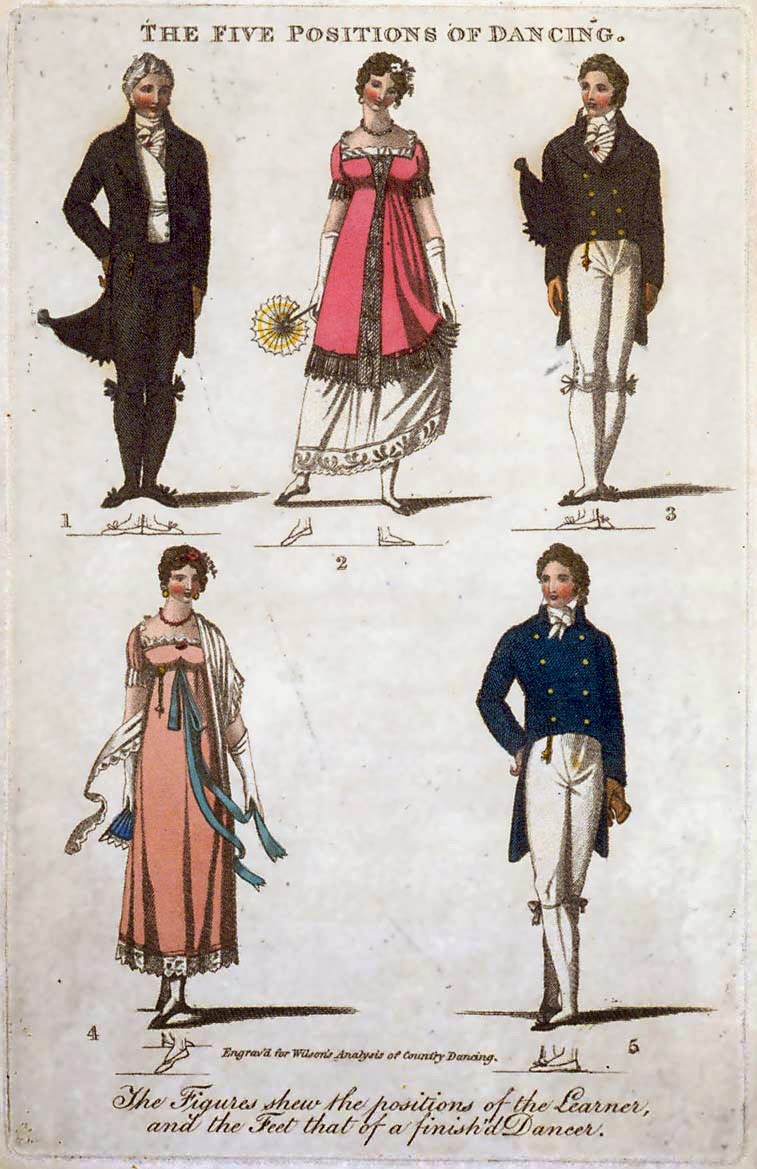 The Five Positions of Dance, Wilson 1811

This physical nature and the need to practice and hold small dances leads to the other part of this piece—sprung floors.  Connecting the floorboards to each other with dowels rather than nailing each board to the joist underneath it creates a sprung floor. The weight of the completed floor and the skirting boards along the walls hold the floor in place. One of the advantages of a sprung floor is that it gives, that is, it moves very slightly. For a dancer this means that the floor cushions the foot as the foot meets the floor. Dancing shoes of the 18th and 19th centuries are similar to ballet shoes, very thinly soled and afford little protection for the dancers foot. Anything that helps relieve the force of a foot hitting a floor repeatedly must have been welcomed. Apart from the benefit to dancers was the additional benefit for musicians. This type of floor acted as an extra soundboard, which meant that a room constructed with a sprung floor could be used effectively as a dancing and performance chamber. By the end of the 18th century larger assembly rooms were created using this technique to help alleviate the fatigue of dancing all night on the balls of the feet. In the 20th century large ballrooms were constructed with these floors to help alleviate the fatigue of dancing all evening in hard shoes.  For dancers who wear thin soled shoes a sprung floor is a desired dancing surface.


The social nature of country dancing lent itself to the growth of polite society that developed during the 18th century. The small set number that Scottish country dancing utilized and the nature of this style of dancing may have led to two remarkable floors from the early part of the 18th century in Portsmouth, NH and Philadelphia, PA. An Ulster Scot, Archibald MacPheadris (1680-1729) a trader, merchant and sea captain created enough wealth to build a London inspired brick town house in Portsmouth in 1716, which is now known as the Warner House. On the second floor of this house is a good-sized chamber with wood paneled walls and a sprung floor that opens onto a central landing. Currently presented as bedchamber from the second half of the 18th century, this chamber as constructed may have initially been used as a formal reception chamber on the piano nobile as was in the taste of 1716 London. Certainly the construction of a sprung floor would seem to indicate a specialized use rather than just a construction exercise. This is just conjecture, but after lessons and dancing in small setts, this room without the bed in it would have accommodated a six to eight person dancing set admirably.  The use of a sprung floor could have softened a night of dancing and no floor like it exists in the city from this period. That is not to say there were no others, but it is an anomaly for the region for this period.
James Logan (1674-1751) although more directly connected to Scotland was born in Lurgan, Northern Ireland. Logan, also a trader and, not inconsequentially, Secretary to William Penn, created enough wealth to build on the outskirts of Philadelphia a house and plantation named Stenton for his father’s birthplace in Scotland. (Klein, Stenton A Room Furnishings Study, p.6)  Construction of the house began in the 1720s and was completed by 1730. (Klein, p.10)  The first floor reception room or parlor of the house has a sprung floor. (Klein. P. 23) Connected to the entry hall and a back chamber, this may have provided an entertainment chamber that allowed for a larger viewing audience as a similar but not exact arrangement provided in Portsmouth. By the 1760s there are more examples of sprung floors in the Mid-Atlantic region such as Woodford Mansion (Rienberger, The Evolution of Woodford, p 31)


Sprung floors were a relative oddity and the reasoning behind installing them has remained somewhat of a mystery. The original bill of construction from 1716/17 exists for MacPheadris’s house and illustrates that a doweled or sprung was more expensive to build than a nailed floor. Several charges occurred for flooring but in the earliest phase of construction two entries marked the difference in pricing between standard flooring and doweling. The standard charge was 12 shillings per square of flooring, while the doweled section was 30 shillings. The 3.5 squares matched the size of the sprung floor on the second level.  The cost to lay a doweled floor would seem to indicate a specialized need as no other floor in this house or Stenton has this feature. In Portsmouth, the special nature of this floor was brought home this past summer when a renowned bassist tested the qualities of the sprung floor. The bassist felt that the floor and room added depth to the sound and I can attest to the strength of the sound that travelled through the hallways and down the staircases. It was a moment suspended in time and for that instant I enjoyed an aspect of the house rarely heard or felt since the early 18th century.

It is conjecture, but was the use of sprung floors in this period tied to the entertainment function of the original room settings?  Was a cultural bias toward robust country dancing and musical evenings a driving force for the use of a type of flooring not used by their English neighbors? It is impossible to say at this juncture, but it would seem that there should be a reason that two principal rooms, half a seaboard apart, were designed to function in such a distinct manner.  Just in case either of these rooms are ever used again for entertaining it is time for me to go practice Cadgers in the Cannongate, which has a beautiful crossover reel in it.

Mark A. Reinberger,  The Evolutuion of Woodford, an Eighteenth-Century “Retirement”, The Pennsylvania Magazine of History and Biography
Vol. CXXI, Nos. 1/2 (January/April 1997) http://journals.psu.edu/pmhb/article/viewFile/45138/44859

The circa 1716 bill presented to Archibald MacPheadris by John Drew for the construction of the house is in the Warner House collection kept at the Portsmouth Athenaeum.

Jeff Hopper is a Consultant, Historic House Steward andSocial Historian
Posted by SilkDamask at 5:59 AM