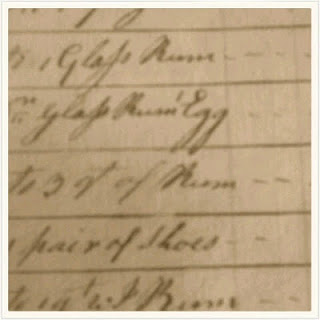 Egg Rum and Egg Brandy: The Cold Winter of 1793
On Monday May 20, 1793, there were a number of special alcohol purchases which appear in the Gen. Montgomery Store Daybook. They include postmaster Moses Dow’s 1 quart of Mallago (Malaga) wine, a glass of ginn [sic] and of particular interest, one 1/2 bowl of egg rum.  A few days earlier the purchase of “egg brandy” was noted.  According to food historians, this concoction was related to our contemporary eggnog, being a drink of egg, wine and milk/cream with many historic European antecedents.
Egg brandy or egg rum as recorded in the Daybook, was in Colonial America somewhat different than its British counterpart in that it substituted the British use of wine for brandy or rum. It was quite popular in the Colonies, especially in the colder parts of the region where the egg beverage (egg, cream or fresh milk and brandy or rum) was rich, tasty, filling and was usually flavored with nutmeg or allspice. In a rural area like Haverhill, the ingredients – fresh cream and eggs, brandy or rum and spices-- would have been readily available. Given the fact that this was served at the Store, it is likely that it was served cold and not warm such as a posset, which required heating and carefully balanced ingredients, as well as appropriate ceramic serving vessels, frequently with a spout.
While it might seem too heavy for serving in late May by contemporary tastes, it was no doubt much lighter in concentration. However, of particular importance in the selection of this variant of “eggnog” was the fact that weather reports for May of 1793 reveal that it was the second coldest May to be recorded (in the North American Review, for example) until the famous cold of 1816, which many referred to as the year “without summer.”  The unusual cold of April and May, which reportedly froze buds and kept the ground hard well past usual planting dates, would have also changed patterns of trade, travel, purchase and even the number of ventures out of doors to the Store. The weather, not surprisingly, changed the routine of daily life not only in Haverhill but throughout New England.
Although contemporary receipt books and accounts appear not to list an egg brandy or rum (most likely because it was an understood, standard beverage) there was a close relationship between them and an eggnog and a syllabub. The creation of a syllabub required time and careful beating of eggs and cream, whereas the preparation of this "egg rum" or "egg brandy" one can easily imagine being created in the store along with the frequently mentioned bowl of grog.  (Grog was also a rum –based beverage, frequently mixed with other spirits or citrus or other juices or diluted.)

From a forthcoming article on General Montgomery and the 1793 Daybook. 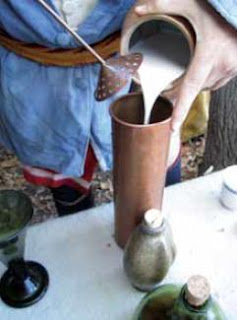 Take a quart of thick cream, and half a pint of sack, the juice of two Seville oranges, or lemons; grate in the peel of two lemons; half a pound of double-refined sugar, pour it into a broad earthen pan, and whisk it well; but first sweeten some red wine, or sack, and fill your glasses as full as you chuse; then as the froth rises take it off with a spoon, and lay it carefully into your glasses, till they are as full as it will hold.
From Charles Carter The London and Country Cook (London: 1749)

Take two porringers of cream and one of white wine, grate in the skin of a lemon, take the whites of three eggs, sweeten it to your taste, then whip it with a whisk, take off the froth as it rises and put into your syllabub glasses of pots, and they are fit for use.

From Amelia Simmons American Cookery: or the Art of Dressing Viands, Poultry….Adapted to this Country and All Grades of Life (Albany, 1796)

Further information on the derivation of the term “egg nog” may be found on numerous historic food ways websites and in reproductions of historic cookbooks such as that of Amelia Simmons by Applewood Books.

Journal of the Early Americas:
http://www.journaloftheearlyamericas.com/2/post/2011/7/brand-new-recipes-archive-browse-your-favorite-historical-cuisine.html
Posted by SilkDamask at 11:23 AM