"The Turncoat: Renegades of Revolution" A Novel by Donna Thorland

The story behind the story is that I wanted to reach out to audiences that might not have picked up a book about 18th century America and show them that the era was dangerous and sexy--in much the same way Assassin's Creed 3 has done. The book is loosely inspired by the story of Quaker spy Lydia Barrington Daragh (1728-1789) who saved Washington's army from a British sneak attack in the winter of 1777. In movie terms, it would be Dangerous Liaisons meets La Femme Nikita. But I knew that if I made a trailer, my friends in the pubic history community would expect accurate costumes, weapons, and locations. The book is set in occupied Philadelphia, but I live in Boston, and the 1747 Shirley Eustis House stands in for locations in the City of Brotherly Love. 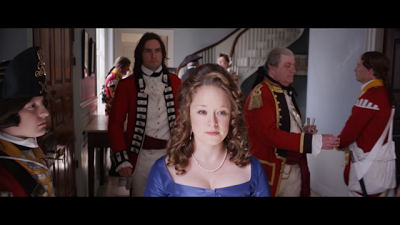 Costume enthusiasts will be interested to know that the blue gown was copied by Lavender's Green (http://www.lavendersgreen.com) for us from this one in the Metropolitan Museum of Art (below) (http://www.metmuseum.org/collections/search-the-collections/80001535?img=1) 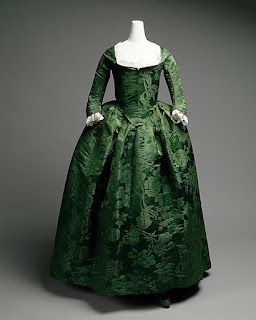 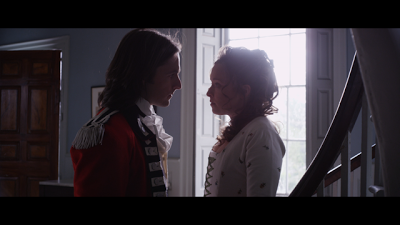 The embroidered linen jacket and silk petticoat worn in the image above was designed by the Silly Sisters (http://www.sillysisters.com). Finally, at the close of this post, there is a lampas silk brocade gown worn in the trailer that I couldn't resist trying myself!
To bring my debut novel, “The Turncoat” to a wider audience, we also produced a trailer, which was a project in and if itself.  My colleague, Peter Podgursky and I produced and directed the trailer.  It was filmed on the Red Epic camera by Charles DeRosa over two days at the Shirley Eustis House in Roxbury, Massachusetts (http://www.shirleyeustishouse.org), the only colonial governor’s mansion still standing in America. Starring Angie Jepson Marks, Liam McNeill, Georgia Lyman, Douglas Cochrane and Alan White, with fight choreography by Kim Carrell, appearances by the members of Gardner’s Regiment, the First Foot Guards and the Tenth Regiment of Foot, and a score written and performed by Emmy winner David Klotz.

About Donna Thorland
Donna holds degrees in classics, art history, and film from Yale and the University of Southern California School of Cinematic Arts. She has been a public historian, a Disney Fellow, a sorority house mother, and a primetime television writer. Her debut novel, The Turncoat, will be released by Penguin NAL March 5th, 2013. 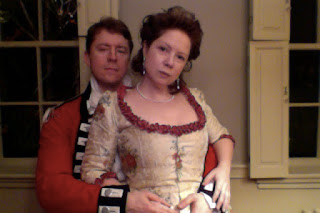 Posted by SilkDamask at 9:11 AM