A tale of the male pannier or...a lost garment of the eighteenth-century.

Monsieur Fauteil! Your arm is in the way of my pannier!

In his book “French Furniture Under Louix XIV,” Roger de Félice provided several illustrations of the shift from the earlier fauteuil, an open sided armchair, with its combined front leg and arm support to the separation of the front leg from the arm support to accommodate the pannier. He observed:

“ ‘These panniers are a frame of Whalebone, or sometimes of wicker, covered with linen and put by women under their skirt, and by men in their coat-skirts, to keep them stiff and standing out.  The machine is considerably developed at each side of the wearer, bat (sic) very little at front and back, so that a lady from her slender waist and huge panniers looks like a washerwoman’s paddle.’  The poor woman bundled up with this were never able to find room in an arm-chair; so they were perforce reduced to chairs, as their great-great-grandmothers had been by their farthingales.  A gallant upholsterer in an ingenious turn devised the remedy; he set back the consoles of the arms, and the panniers could spread themselves at their own sweet will in front of the chairs.”
(Roger de Félice,"French Furniture Under Louis XIV," Heinemann, London 1922. P. 135)

“The shapes [of  the chairs, furniture in general]  remained heavy, ample, and monumental.  They did lose some of their austerity, however, thanks to the rapid development of subtle undulations: the pediments of wardrobes began to curve, the legs of chairs and tables ended in goat's feet or sometimes volutes, the line of chair backs undulated more or less in an embrace, while seats took on a slight barrel curve.  Women's fashions alone would have forced menuisiers to revise their formulas, even if they hadn't wanted to: the fullness of the hooped skirts that came into fashion in 1718 obliged menuisiers to alter the location of the arms of their chairs, setting them back from the two front legs.  X stretchers between the legs tended to disappear, giving chairs a less constrained, lighter appearance from about 1720—30.“ (Pierre Verlet, (Penelope Hunter-Stiebel Trans.),  “French furniture of the Eighteenth Century,” University Press of Virginia, Charlottesville, 1991. p. 35) 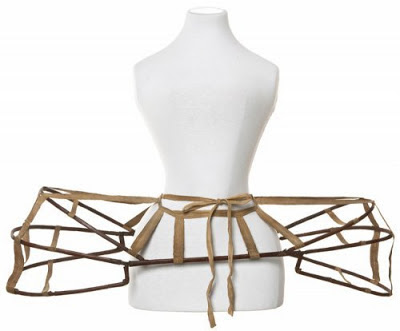 Furniture builders adapted the armchair form to accommodate panniers, usually described as a woman’s undergarment constructed of wire or cane that widens the hips.  However, Felice also indicates pannier’s for men. While he does not name his source directly, he does acknowledge several sources in the beginning of his book. Thirty years later, Verlet notes the shift in arm placement, but only refers to women’s hooped skirts, or panniers, as the reason.  So why does Felice reference male panniers?  Did such an undergarment exist for men, or does pannier in this instance refer to the result, but not the mode?

According to a reader of Addison and Steele’s Spectator, there are wires in the coat skirts of fashionable London men of 1711.  (The underlined section does not appear in the original, but is here for ease and emphasis.)

“Mr. SPECTATOR,
I and several others of your Female Readers, have conformed our selves to your Rules, even to our very Dress. There is not one of us but has reduced our outward Petticoat to its ancient Sizable Circumference, tho' indeed we retain still a Quilted one underneath, which makes us not altogether unconformable to the Fashion; but 'tis on Condition, Mr. SPECTATOR extends not his Censure so far.  But we find you Men secretly approve our Practice, by imitating our Pyramidical Form. The Skirt of your fashionable Coats forms as large a Circumference as our
Petticoats; as these are set out with Whalebone, so are those with Wire, to encrease and sustain the Bunch of Fold that hangs down on each Side; and the Hat, I perceive, is decreased in just proportion to our Head−dresses. We make a regular Figure, but I defy your Mathematicks to give Name to the Form you appear in. Your Architecture is mere Gothick, and betrays a worse Genius than ours; therefore if you are partial to your own Sex, I shall be less than I am now
Your Humble Servant.
T.”
--The Spectator, No, 145 August 16, 1711. Steele 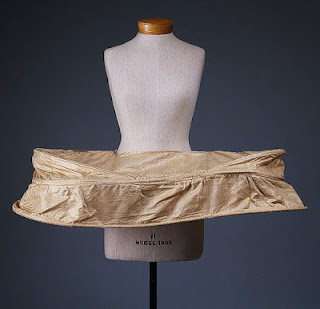 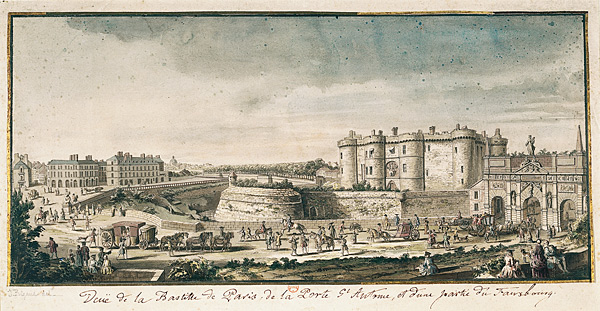 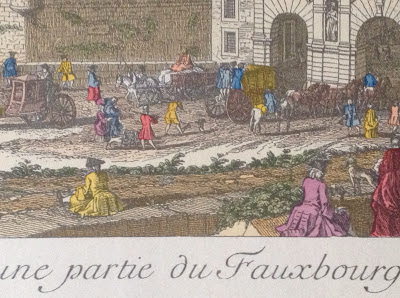 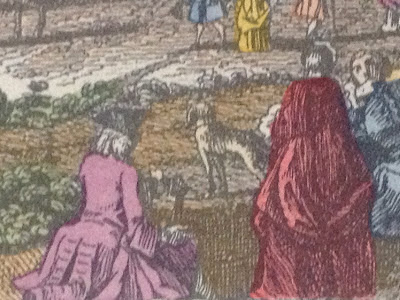 Rigaud’s ‘Vue de la Bastille de Paris, de la Porte St. Antoine d’une partie du Fauxbourg’ of 1720 shows the St. Antoine gatehouse, one of the entrances to Paris, which was located next to the Bastille. (http://classes.bnf.fr/livre/grand/627.htm)  While there are a number of men in coats, two figures in the lower right of the engraving are of particular note.  Seated with their backs to the viewer their coats display an odd shelf, which seems to resemble a posterior pannier.  It appears that some type of form holds the backs of the coat skirts in a rigid manner.  How is this form maintaining its shape under the weight of the fabric and the positioning of the bodies?  Is this the pannier that Roger de Félice references?  It may be contrived, but it seems an odd affectation in an otherwise mundane view of travel and commerce. The images above and below are from the engraving. 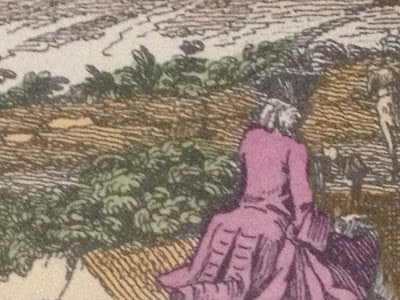 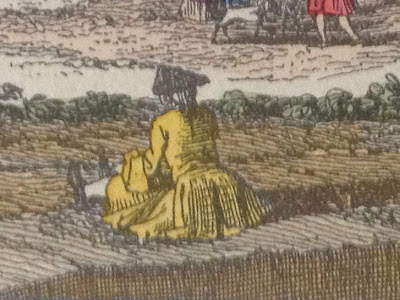 To date, any examples that I have found of early 18th century male coats note an inner layer of buckram or horsehair, but no other forms of manipulation.  This engraving seems to indicate that more yjan starched lining is being used to create a panniered appearance.  So where have all the wires and whalebone gone?

The history of the male pannier has been considerably shrouded, perhaps in part because so few examples remain extant - coats were costly, constantly updated to the current styles, wires removed and stiffners relaxed. As I have discovered, the fullest accounts appear in relation to furniture adaptations or in prints. It appears that this form of male attire occurred primarily in the first half of the eighteenth century, paralleling that of women's fashions.

This is excerpted from a forthcoming article.
Posted by SilkDamask at 8:22 AM