A Cordwainer, a Wedding Shoe & a Gaspee Patriot

I recently happened across a labeled silk damask shoe in the past offerings of Augusta Auctions. The shoe & its label piqued my interest. The physical details are well documented at www.AugustaAuction.com. 1

Intrigued by the rich mocha hues, I could see past the wear and abraded surfaces to imagine the shoes with their original silk sheen and a pair of glittery shoes buckles. But it was a Pre-Revolutionary, Providence, Rhode Island label, identifying the maker, which truly captured my interest. I have spent considerable time corralling shoe labels from the UK and the Colonies for current research on shoes as trade commodities. 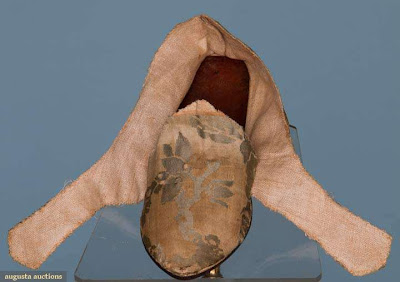 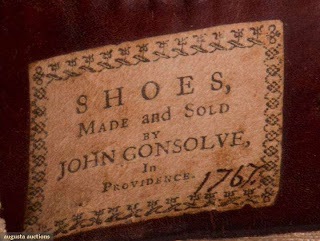 Naturally, this small label served as an advertisement or calling card for “John Gonsolve” and his business, located near the Mill-Bridge. Gonsolve clearly had success in his trade as a shoemaker, as one of his advertising notices from 1785 attests: he is seeking “Any Gentlemen of the Craft, duly qualified…and wanting a Seat in my shop…may have constant Employ, and good Wages.” 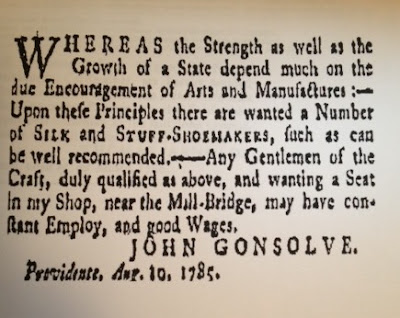 Gravitating to the inked in date of "1767" posed a number of questions: Was it added by the shoemaker or the wearer of the shoe and her descendants? Were the shoes preserved by the family because they were a tangible artifact of their ancestors lives or because they were treasured heirlooms representing stories lost to the historic record?  Given the impeccable provenance, knowing that the original owner of this pair of damask shoes was Phebe Wardell Smith (1748 – 1840), I dug a bit deeper.

As it turns out, she was married in December 1767 to James Smith of Bristol, Rhode Island (c. 1745-1826), indicating these were probably her wedding shoes. Details about her husband's life are hard to come by, with one significant exception: the recent discovery of his connection to the burning of the British cutter Gaspee in Providence in 1772. One of Smith’s compatriots, Ezra Ormsbee, notes in his pension application:

"In June 1772 when the English Revenue Cutter Gaspee was burnt in Providence River, I was one that went from this town and helped do it. Capt John Greenwood, James Smith, Abner Luther, Abel Easterbrooks, Nathaniel Easterbrooks, Hezekiah Kinnicut and myself went together in a whale boat and we helped burn her. I mention this merely as a revolutionary incident and not as connected with my pension claim. All the above named persons who were with me in burning the Gaspee have a long time now decd." 2
Married for about five years at the time of the destruction of the Gaspee, one can only speculate about what Phebe, as the wife of very active participant in the Revolution, experienced. Certainly, her now well-worn shoes walked many miles, perhaps pacing with concern for his safety, during those tumultuous times. Indeed, Phebe and her young children removed to Dighton, Massachusetts for the duration if the conflict. The couple had six children.

One additional document provides information about James Smith’s role in the Revolution – Phebe’s pension request. Interesting reading, it is quoted in full from the Gaspee Virtual Archives below.3 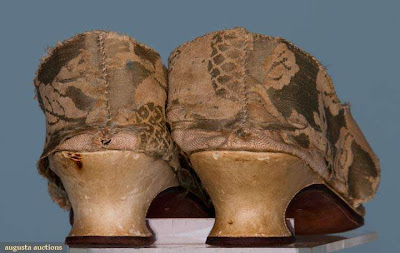 2. Genealogical researcher, Pam R. Thompson wrote to the Gaspee Days Committee (www.gaspee.com) in 2005 that she had discovered a curious entry in the Revolutionary War Pension File, #S21404, for Ezra Ormsbee, born 30 March 1751 in Warren, RI, son of Ebenezer Ormsbee (sometimes spelled Ormsby) and Hannah Cole (Benjamin3, Hugh2, James1)  Ezra applied for his pension in Warren, RI, on 24 August 1833. It is here that the role of Smith is recognized.

3. Sections in bold added by author.
The Gaspee Virtual Archives note that Phebe, as James' widow, applied for pension (W12985) based on the Act of 1836 for his Revolutionary War service.

“Unfortunately, the copy available on HeritageQuest through NEGHS is hard to read--much of this is guesswork. The pension appears to have been applied for on 3Oct1836 from Bristol, RI, which was granted of $30 per year, and notes he served as a Private in the Captain Jeremiah Ingraham's Company of Bristol Militia from the commencement of hostilities until January 1776.  In January 1776 he enlisted into Captain Loring Peak's Company, serving three months while the company was stationed at Bristol. In 1777 her husband enlisted into Captain Caleb Carr's Company of Colonel Archibald __(?Throop)__'s Regiment one year while in Bristol, and at which time she and her children were inhabitants of Bristol during the Alarms, from which she moved to Dighton, MA and remained for the remainder of the war.  She did recall that her husband served out the war, and that he had been attached to Colonel Ormsby's Regiment [A connection to the Gaspee ]. She also recalled her husband was involved with British General Sullivan's capture from Portsmouth, RI.  She stated that she married James Smith in Bristol in December 1767, and that her husband James Smith died on 30June1826, and that she had since remained a widow. Documentary evidence accompanying the application includes a certification of the marriage between Phebe Wardwell and James Smith, and relates that James was the son of Samuel Smith of Bristol, and Phebe was the daughter of John Wardwell of Bristol.  There is also a statement from James Smith, Jr  corroborating the facts as his mother claims. There is no mention made in the pension paperwork about the Gaspee attack.”

All images of Phebe Wardell Smith's shoes are courtesy of www.augusta-auctions.com. You can find Augusta Auctions on Facebook and Twitter.

Posted by SilkDamask at 6:51 AM