During the course of my dissertation research on William Robert Ware (1832-1915), founder of the first architectural program in the United States at MIT, I happened across a number of drawings by 19th century British architects. 1 They were gifts to Ware from his colleagues and as such, were included in his Study Collection.

One of the architects who captured my attention was Enoch Bassett Keeling (1837-1886).  Keeling, this “rogue” architect (so coined by H. S. Goodhart-Rendel), had a controversial approach to design. His drawings are surprisingly free and fluid, especially when compared to the work of other English architects represented in the MIT Collection. Keeling often chose to loosely color some portion of the drawing to give the viewer a sense of what it would be like, rather than rendering it in painstaking detail. He was known for completing his projects on time and on budget, making him popular with clients. However, his use of bold, bright, and often strident, shrieking polychromy, won Keeling both praise and criticism. Further, Keeling explored the application of cast iron in his church interiors, a fact certain to create disdain among the followers of John Ruskin and his Seven Lamps of Architecture (1849). Keeling’s inclusion in Ware's Study Collection attests to his desire to survey the full range of English architectural practice. 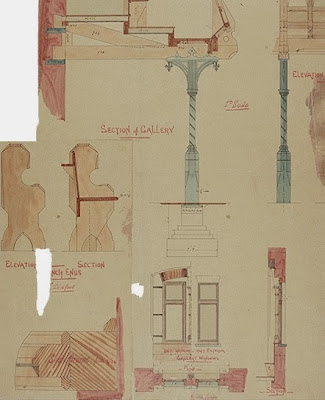 Upon his return, Ware's letters of thanks to Keeling, Waterhouse, David Bryce, and Alexander Thomson for their gifts and hospitality reveal the strong impact his stay in Britain had on him. In his private practice with Henry van Brunt, the influence of Keeling is most apparent in their 1st Church, Boston. (More on this project in a future post.) In the first decade of architectural instruction at MIT, Gothic and Classical precedents were given equal treatment in design problems, with the Gothic eventually being superseded by the Classical via the Ecole des Beaux Arts.
1. Alexander-Shilland, Kimberly. “Ware & Van Brunt: Architectural Practice and Professionalization, 1863-1881” Boston University Ph.D. Dissertation, 1999.

This information is updated from previous work by the author, courtesy The MIT Museum. (http://web.mit.edu/museum/ware/ware_bio.html) Architectural drawings are courtesy the Architectural Collection, MIT Museum.