“Such sleeves I never beheld – complete frights” opined the youthfully outspoken 20-year old Harriett Low (1809-1877). It was not a particularly unique statement from a young woman who was a keen observer of the fashions from antebellum America. What makes Low’s discomfort particularly interesting was the context in which she evaluated the costuming she confronted.  Raised in Salem, Massachusetts, in 1830 she was a resident of Macao, China, and her words remarking upon "the latest Calcutta fashions” recently brought to her in Macao, China were carried in a letter, written 18 August 1830 to her sister, back home in Salem.

A self-proclaimed “travelling spinster,” the unwed twenty-one year Harriett Low had traveled to China to serve as a companion to her frail aunt Abigail and her merchant uncle William Henry Low.1 Prior to her departure, Harriet Low’s life centered on her large family, her Unitarian Church and her schoolgirl friends.  Staunch New England Unitarians, the family’s emphasis on reading, particularly religious tracts, harkened back to Puritan ancestors who made communal literacy and personal engagement with the Word centerpieces of their simple practices.  Although engaged Protestants and global travelers, their gaze remained rather parochial and intolerant of they foreign influences about them. These New England expatriates bridled at everything, from the boisterous cacophonies of Chinese holidays to the intemperance of European fashion to their perception of the superstitious and ignorant qualities of the Roman Catholic rites they found in the Portuguese outposts, such as Macao, which they considered their temporary home.  2

While men focused on cultivating strong business associations through honest business transactions, genteel and polite public interaction and hard work aboard ship and in the Canton factories, the very social environment of Macao, inhabited primarily by women and families, was quite different.  Daily visits, dinners, teas, balls, concerts and operas entertained the residents of Macao. So too did the routine of walks and riding characterize their days.

Clothing was an important connection to her American home and Harriett repeatedly notes her active dressmaking and millinery projects while in China, with more than an occasional nod to Yankee thrift. On Monday 28 March 1831 (210), she notes:

"Pulled out old dresses to day and find the great sleeves worn last summer will have to be cut out. Oh dear what a job. What slaves to fashion women are."
Her primary responsibility for her large family back in Salem was as seamstress; she continues to connect with her family during her time in China via her hand work: “Evening mended silk stockings, delightful employment” [Saturday 5 December 1829]; “At home cutting a white dress, so you see we have employment all the time” [Thursday December 10, 1829]; “Commenced making a bonnet [Weds. 16 December 1829]. She also notes remaking gloves and having to rip out the stitches, updating bonnets and making clothing for others. These entries ensured that her family knew she was engaged in worthwhile, productive activities, although, in fact, as the reader will discover, she was enjoying a much busier social life then she had known previously at home in Salem.

She takes pride in the straightforward and “neat” dressing of the American women when she confides:

"Wore a white muslin trimmed with yellow satin over white satin. Though the plainest dress in the room, it was as handsome as I wished.  [Monday 9 November 1829]
However, when Harriett sits for English painter George Chinnery (1774-1852), in 1833, her New England simplicity exits stage right! Harriett’s personality is captured in this Grand Manner-style portrait, which depicts her in an elegant and lavishly textured, high style 1830s gown and accessories. Her billowing sleeves (no doubt similar to the ones brought from Calcutta) almost overshadow her hands and the precious book they hold. Harriett comments that “when he placed the book in my hand,” her portrait, and by extension, her image of self, was complete, referring to the virtue of literacy and learning in the young republic.


An interesting and complex character, much has been, and will continue to be, written on Harriett Low.

This excerpt is from a paper presented by the author at the American Historical Association annual conference held in Boston, January, 2011. 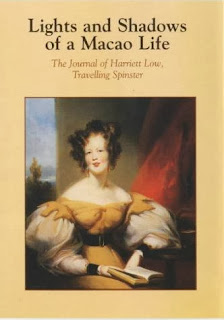 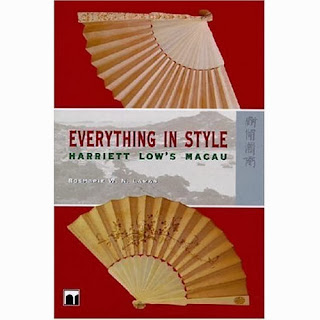 Posted by SilkDamask at 9:03 AM