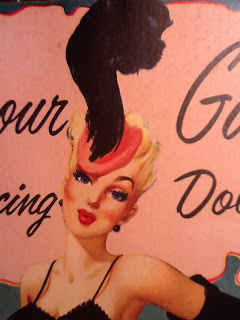 I recently came across this 1953 Glamour Girls Paper Dancing Dolls book at a flea market in near perfect condition. It has been waiting on my desk, patiently, for a post. Published by the Merrill Company of Chicago (“Fine Books for Children”), this is one of a myriad of paper doll books produced by the company and many others, including editions featuring Marilyn Monroe and Rita Hayworth.

Girls could select Elizabeth Taylor or even Lucy (from 1964, Lucille Ball) paper doll book. A fashion time capsule, the publications were available at a reasonable cost and stoked the imagination of a glamorous life of stage and screen. Certainly, paper doll books and collections instilled a visual language of what constituted “glamour” and physical beauty in the pre - Barbie era (launched March 9, 1959 and created by Ruth Handler.)  The combinations of costumes available, as illustrated in the book, were somewhat scanty: the undergarments for example, consisted of lacy tap panties, black bras with gloves and heels. Some of the ensembles were similar to ones my grandmother wore - such as the mink stole which well dressed ladies wore even to shop at the A& P outside of Washington DC, into the 1960s; while others, such as Babs proto “I dream of Jeannie” harem costume, were nothing if not exotic. While the shoes were not strictly speaking stilettos, they certainly gave a knowing nod to the footwear first known as “stiletto daggers” in the 1930s and popularized during the 1940s by designer Andre Perugia (1893-1977). Long diaphanous robes, feather "fascinators,” fruit-topped hats and creative bags were available to accessorize your doll. Babs is my personal favorite - with her trim figure, rosy cheeks and slightly startled, doe-eyed gaze - the designer gave her a choice wardrobe from which to select many ensembles throughout the day. 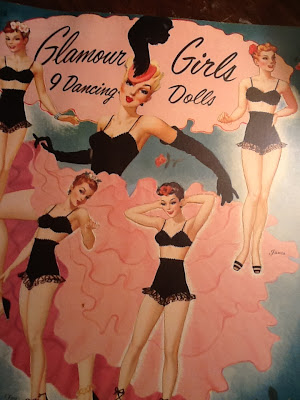 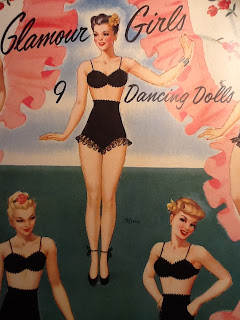 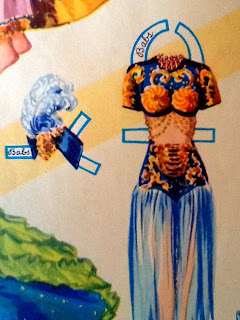 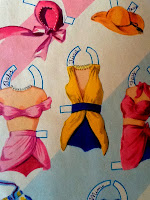 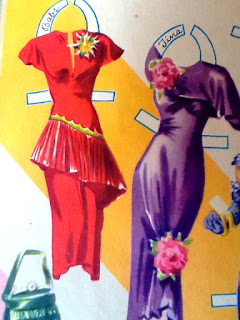 The paper doll genre is one with which I am unfamiliar. During my childhood, my sisters and I preferred 3-D dolls like Madame Alexander, Dawn, and Chrissy. It was not surprising to learn that paper dolls were first manufactured in the early years of the 19th century in the UK.  What DID surprise me was that paper doll collections continue to be created today - frequently as political party “collectibles.” It had never occurred to me that there were Michelle Obama papers dolls -- though her stunning fashion selections certainly warrant the attention. Dover Reprints has a produced a series which is of interest to the costume and fashion historian. 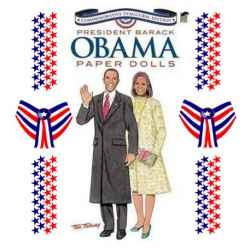 Enjoy!
Posted by SilkDamask at 1:29 PM