Truth in Marketing, A Stange Bedfellow for History 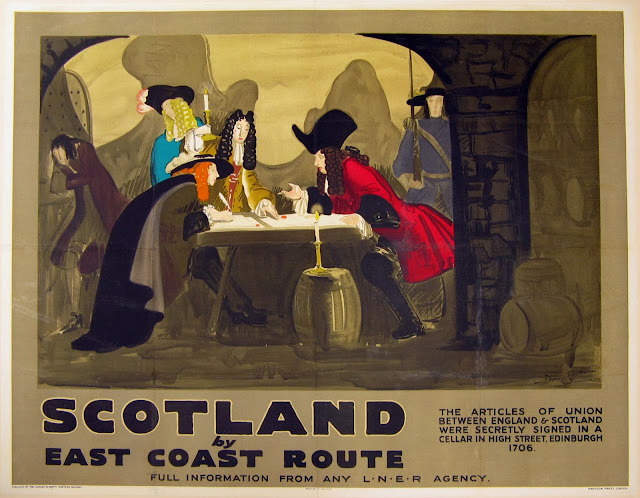 On a cold grey December day that mirrors one I remember from long ago, oddly not far from the site of this scene, I found myself looking at a 1930s poster created for the LNER by Doris Zinkeisen (1898-1991).  I enjoy posters and when this image fell into my lap the other day the theatricality of the piece captured me.  It reads far more like a cartoon for a stage set or a historical romance film than a poster for a major rail line.  The hat on the red-coated gentleman is reminiscent of John Hurt and Tim Roth’s characters in the 1995 version of Rob Roy; it’s strange how the mind works. Well it seems that Zinkeisen was not only an artist but also a set and costume designer.   Then I looked at the text below and to the right of the image, which describes the scene as the secret signing of the article of Union between England and Scotland.  (I have absolutely no comment on the current referendum)  Having read Scottish history shortly after this event occurred it struck me that I had never heard of it, and for good reason, it didn’t happen.  As Dr. John Young, Sr. lecturer at the University of Strathclyde, recounts in an online article from 2009, the tale seems to have been invented in the late nineteenth-century and has survived into the twenty-first.  As the article points out, some parliamentarians may have taken refuge from a displeased Scottish mob in the cellar during negotiations, but no treaty was signed there. The full article is an interesting read and can be viewed here: http://www.strath.ac.uk/press/newsreleases/2009/headline_235561_en.html

Nice piece of theatrical puff, a good poster, an interesting image and the kind of thing that drives some people daft.  But it happens all the time, or at least so this week. Kimberly recently posted a piece about the business card William Hogarth’s created for his sisters’ clothing business. Their shop was located near the gatehouse of Little Britain and it caught my eye. (It’s area of London that intrigues me.)  I found a description of the area in London Past Present: Its History, Associations, and Traditions by Henry Benjamin Wheatley in 1891, who updated an earlier version of the book by Peter Cunningham in 1849.  On page 406 of the book the Hogarth business card is mentioned, but at the same time dismissed as, “probably an Ireland forgery.”  The name Ireland refers to Samuel Ireland, who was a prominent collector of Hogarth in the 18th century. For those interested, there is a book based upon this collection, The Graphic Illustrations of Hogarth published in London in 1794.  Back on track, at the present time, the card is considered real, but sometime in the 19th century at least one person thought it wasn’t. (I cannot find a reference to this in Cunningham’s Handbook of London (1849 or 1850), so it may be Wheatley’s opinion in 1891…?)

Both pieces were produced for travelers, the first to entice and the second to inform. Romanticizing the past can capture an audience and may lead to a genuine enquiry.  We can not know everything about the past so we need to remember to objective lest the relish becomes the joint. Opinions and stories shift throughout history or the understanding of history and there are moments when a new twist influences our perception of the truth, transforms a fact and sends us down a different path.  No treaty was signed in the cellar, but did parliamentarians seek refuge from angry mobs in 1706. Similarly, was there concern in the 19th century that an 18th century collector was manufacturing Hogarth’s work and passing it off as original, or was it an expert establishing his turf?  Another day, another quest…

Jeffrey Hopper is an editor, independent scholar and frequent writer on men's wear and related topics for SilkDamask.
Posted by SilkDamask at 5:49 AM