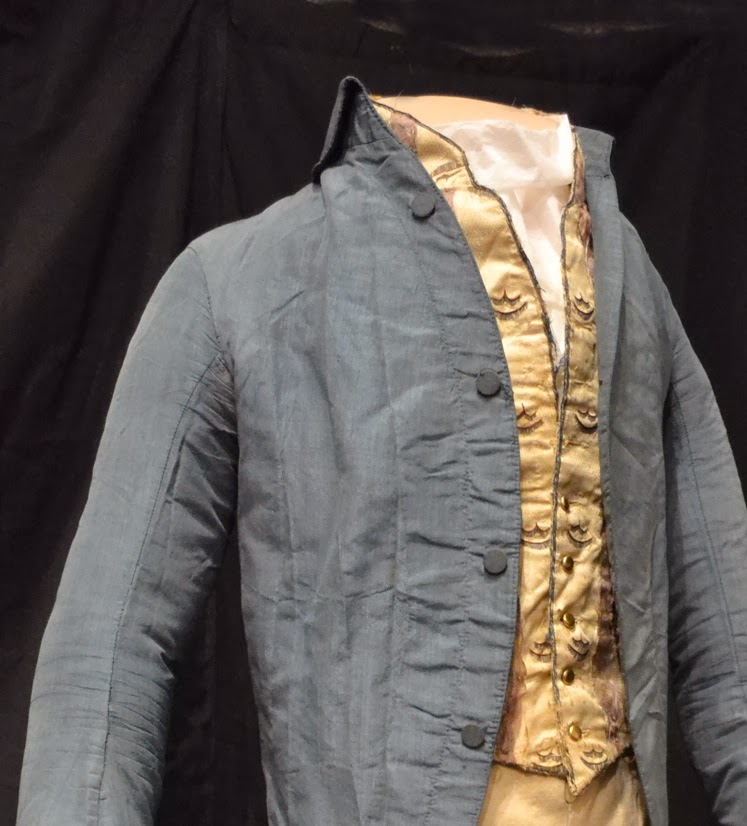 A fine, trim suit worn by Revolutionary war patriot, Samuel Cutts (1726-1801) c. 1780s, will be on view at the Saco Museum, Saco, Maine, from 14 March – 6 May 2014. The narrow cut of the blue silk coat with matching buttons reveals an elaborate silk brocade waistcoat beneath, sporting tiny brass buttons. The fabric for the coat was most likely English but cut and tailored in New England/New Hampshire, while the vest was probably pieced together from a kit. The slim cut of the breeches underscore that this was not the garb of a man involved in physical labor. The ensemble emphasized a lean silhouette with shallow pockets or artificial flaps, all serving to eliminate bulk. There are no coat skirts or extraneous material. 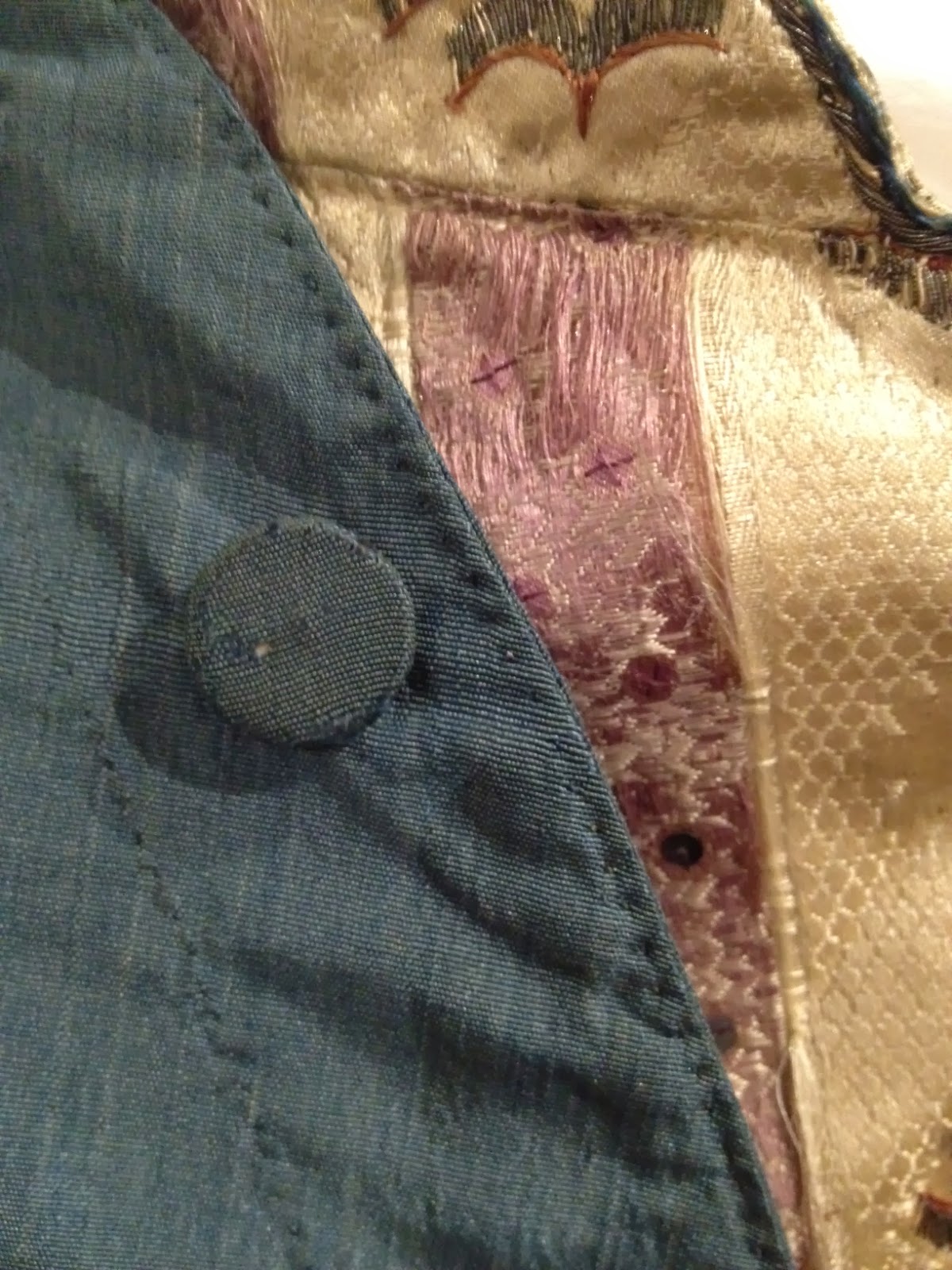 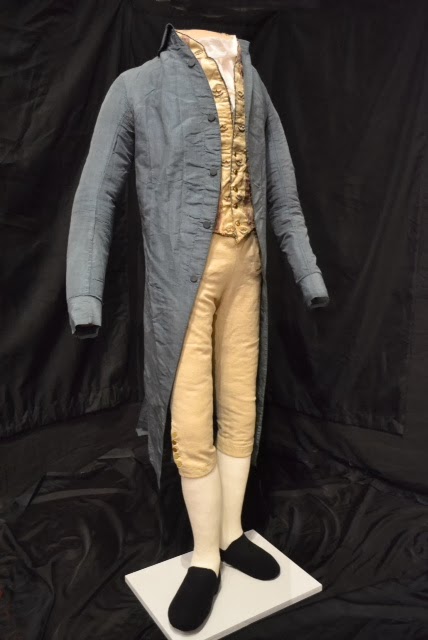 His later ensemble on view at Saco, provides valuable contrast to the suit in which he is depicted two decades earlier (c. 1763) in a painting by Joseph Blackburn at the Metropolitan Museum of Art. One would not surmise that Cutts would “become something of a hero among local radicals” just a decade hence. [1] 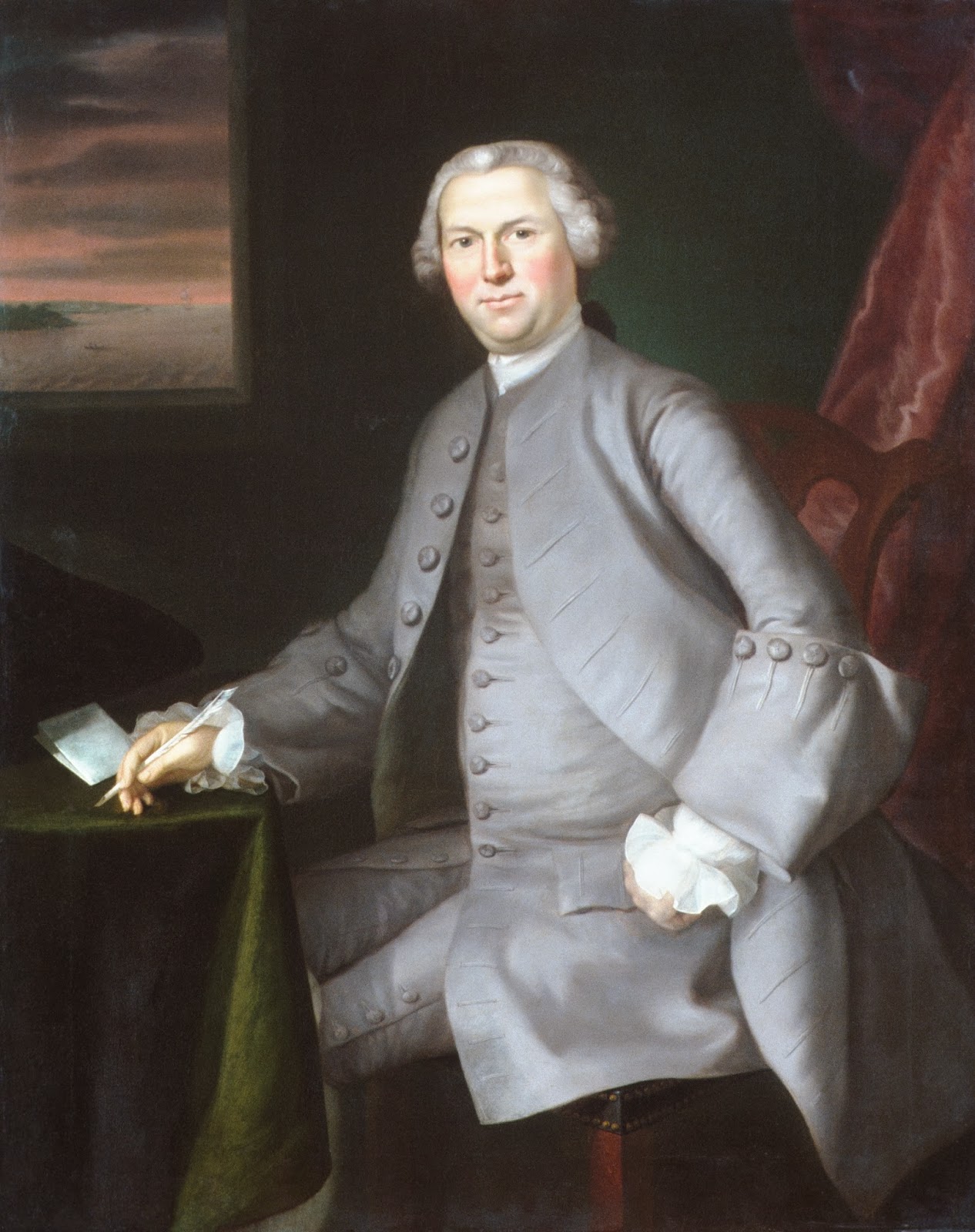 Cutts, of Portsmouth's Committee on Safety, greeted Paul Revere at the conclusion of what is frequently considered his “other” ride at Stoodley’s Tavern in Portsmouth, New Hampshire. Revere’s ride on 13th December 1774 along the Boston Post Road was cold, icy and dark. Occurring months before his more legendary ride on April 18, 1775  Revere road to warn the citizens of New Hampshire of a potential British troop landing. With a tad more aggression, Revere's "Portsmouth Alarm" could well have ignited an earlier start to the American Revolution. The ensuing raid on Fort William and Mary by the seacoast area militia, is still considered by many as the initial strike of the battle for independence.
As noted by Revolutionary War authority J.L. Bell “ If we want to spotlight the moment when the political conflict in New England turned military, then we might want to look at the shots fired at Fort William & Mary at New Castle near Portsmouth in December 1774. Nobody was killed there, but that confrontation got closer to being fatal than the Salem raid [referring to what is popularly known as Leslie’s Retreat].” [2]

The suit is on loan from Strawbery Banke Museum (www.StrawberyBanke.org). The mannequin was created by Astrida Schaeffer of Schaeffer Arts (www.SchaefferArts.com)

[2] For more on the American Revolution and pivotal moments, see J.L. Bell
http://boston1775.blogspot.com/2014/02/should-today-be-salem-gunpowder-day.html

For an overview, see
http://seacoastnh.com/history/rev/revere.html
Posted by SilkDamask at 7:40 AM