The Hancocks of Boston in Wool, Silk & Linen

Hannah Otis’s (1732-1801) sampler “View of Boston Common” (c. 1750, Museum of Fine Arts, Boston) is a charming and significant pictorial narrative, capturing life in Boston prior to the Revolution.  The connection of the sampler to a significant New England family, the documentary nature and large over-mantel size all serve to distinguish it as a preeminent example of school girl skill and, in this case, creativity. It is embroidered in wool and silk on a linen canvas.
This sampler is a delight, and the more time one takes to examine it, the more one sees. Note the British flag waving energetically above the pre-Revolutionary blockhouse, for example. Of particular interest is the representation of the impressive Georgian style Hancock Mansion (demolished in 1863) with its fences, orchards and parterres. The elegant occupants are enjoying the bountiful and exuberant landscape, peppered with unusual birds, animals and over scaled plantings, which  Hannah Otis has created for them.  The couple standing near the wall (just to the left of center) were most likely Thomas Hancock (1703-1764) and his wife, Lydia Henchman Hancock (1714-1776), with their stately home and grounds as a backdrop. Thomas Hancock wears a long red (?) coat with substantial cuffs, a waistcoat, breeches with white hose, and what appears to be a tricorn hat. Lydia Hancock is dressed in the elite fashion of the time, sporting a light colored dress (probably silk) and stomacher.
Thomas Hancock was John Hancock’s uncle. Known as a very wealthy merchant (as well as a probable smuggler) and head of the “House of Hancock,” he opened his home and business to his orphaned nephew, John. Indeed, it would not be surprising if the lad on horseback, with a black liveried groom, depicted in Otis’s sampler was in fact the adolescent John. Born in 1737, he would have been around thirteen years of age. Like his aunt and uncle, young John wears appropriate, fashionable clothing. He is clad in riding gear, including high leather boots. 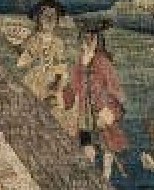 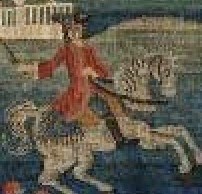 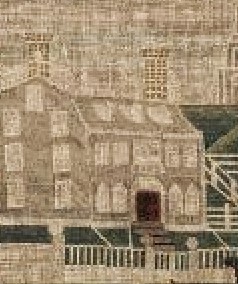 “The most expensive sampler ever sold is View of Boston Common by Hannah Otis (1732-1801), stitched around 1750. It’s a huge piece, meant for display over a chimney mantelpiece, embroidered in wool and silk on linen canvas. It was purchased by the Museum of Fine Arts, Boston at Sotheby’s in 1996 for a record $1,157,500.
Hannah Otis is closely linked to the American Revolution and American history in general. She was born in 1732, the daughter of Colonel James Otis and Mary Allyne Otis. Her mother was a descendant of Mayflower passenger Edward Doty. Her father was a judge and representative to the Massachusetts legislature. He was a fervent anti-royalist as was his son, James Otis, Jr., who introduced the phrase “Taxation without representation is tyranny” during the Stamp Act debates. Hannah’s older sister Mercy Otis Warren was a poet, playwright and historian who published numerous pro-Revolution writings and corresponded with the luminaries of the American Revolution like John Hancock, Thomas Jefferson, George Washington and John Adams.


The sampler remained in the Otis family until the 1996 sale. It had been on loan at the Boston Museum of Fine Arts for over 40 years when the family decided reluctantly that they had to sell it.”
Posted by SilkDamask at 5:20 PM No comments:

Gloves: Would you prefer to wear a Glof or a Handschuh?

What we name a thing can influence it far more than we think. Take gloves. Gloves were such an important fashion accessory that there was and is a Worshipful Company of Glovers, a guild for what we now consider a seasonal fashion accessory, and even that I would suspect only in the northern climes.

The word glove comes from Old English, think in terms of Anglo-Saxon. Old English is Germanic in origin, but differs from modern German. The break between the modern and the old languages is why we have ‘horses’ (Old English/Proto-Germanic) not ‘Pferds’ (Modern German). The same holds true for ‘gloves’ (Old English/ Proto-Germanic) rather than ‘Handschuh’ (Modern German).  The singular of ‘gloves’ in Old English is ‘glof’, but the modern singular of ‘gloves’ is ‘glove’ not ‘glof’.’ This fascinates me as glof/gloves falls into the word group that includes roof/rooves and hoof/hooves, which are plurals out of Beowulf and must be a bear (another idiomatic nightmare) for foreign speakers of English. The plural of roof and hoof is now so unusual that my spell check questions rooves and hooves. (Language intrigues me as much as history)

The word ‘glof’ means, “to cover the hand or palm,” just as the word ‘handschuh’ means “a shoe for the hand, or a covering for the hand.” However, “glof’ has not real meaning in the modern lexicon, whereas ‘shoe’ does. Perhaps if we thought of gloves in terms of ‘handshoes’ we might view them with more excitement as a fashion accessory. (I do realize the Teutonic heaviness of the word, but just go with me for a bit.)  Certainly hats have the Ascot and weddings, shoes have every evening event and then some, but what do gloves have anymore, except shoveling snow, handling objects in museums and hospitals, or serving take-out food?  How the mighty have fallen.


Which brings me to Dents, the Glovers, located in Warminster, Wiltshire, UK.  This summer, I met John Roberts, of Dents, while he vacationed in the US. I knew of Dents so we had an interesting conversation. They have a museum, http://www.dents.co.uk/General/museum/,  devoted to gloves and are connected with the Worshipful Company of Glovers, http://www.glovecollectioncatalogue.org/index.html.  Dents is still using machinery and patterns from the nineteenth-century. Much as their counterparts in shoes are doing in Northampton. Hmm, is there a pattern here? Yes, they make modern gloves and happily are churning them out as I write. Some shoes, like gloves are meant to be snug on the first wear, then over time conform to the owner’s shape. There are finger stretchers for gloves just as there are toe and side stretchers for shoes. (A must for the non-bespoke glove and shoe wearer.)  Gloves come in sizes like shoes and hats. To determine your size wrap a tape measure around your hand, but do not include the thumb. Your size in inches would be something like this; 9.25 inches measured would be a 9.5, or large. You round up to the nearest inch or half inch. I am clueless concerning cm, but it must be similar, I'm just not sure of the size markers. Dents includes a size chart and how to measure on the trade side of their website. That being said, enjoy some of the images from Dents and The Worshipful Company of Glovers collections.


Jeff Hopper is a Consultant, Historic House Steward and Social Historian
Posted by SilkDamask at 6:58 AM 1 comment:

"…Avoid, as intensely vulgar, any display of your position as a bride,
whilst traveling.”
--The Ladies’ Book of Etiquette…by Florence Hartley 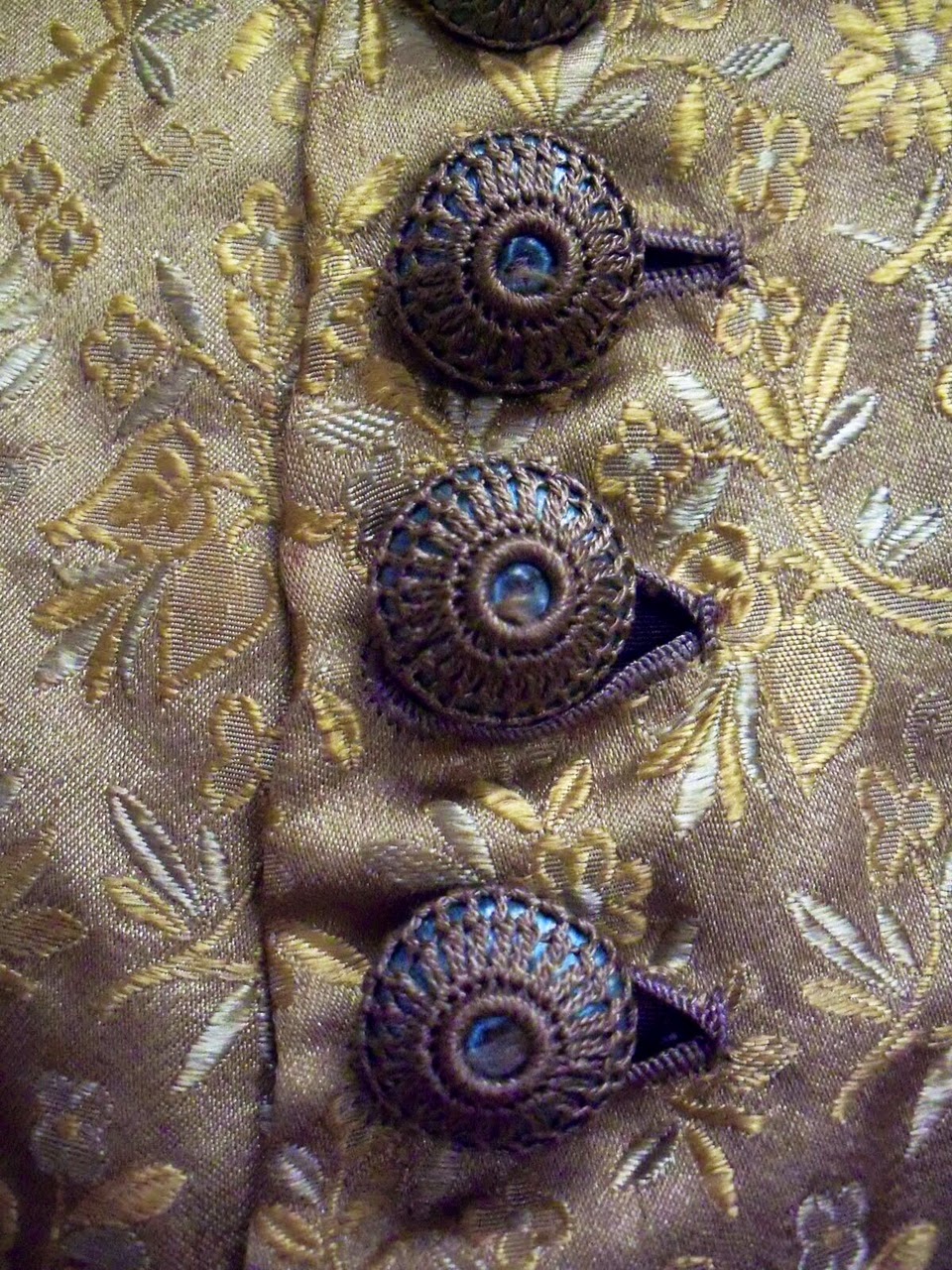 Lily Belle – her name seems the personification of this frothy, embellished “going away” dress, with detachable train and silk fringed wrap. At present, we know little about Lily Belle Folsom Ayres.  Indeed, were it not for the garment’s survival in the textile collection at Strawbery Banke Museum (www.StrawberyBanke.org), her life might not have surfaced, being submerged “beneath the footnote.” It is likely that she was a descendant of the Folsom family of Exeter, New Hampshire. Dripping with fringe, tassels, cording and passementerie, the lavish layers of pleats and ruching, and exquisite tailoring, combine to create a sumptuous dress that was surely a sight to behold as the newly wed Mrs. Ayres, began her wedding trip. Where did the couple travel and in what manner of conveyance, we do not know. Whether by rail car, steamship or carriage, one suspects she was prepared for perambulations, bridal visits, receptions and teas, if the dress is any indication. 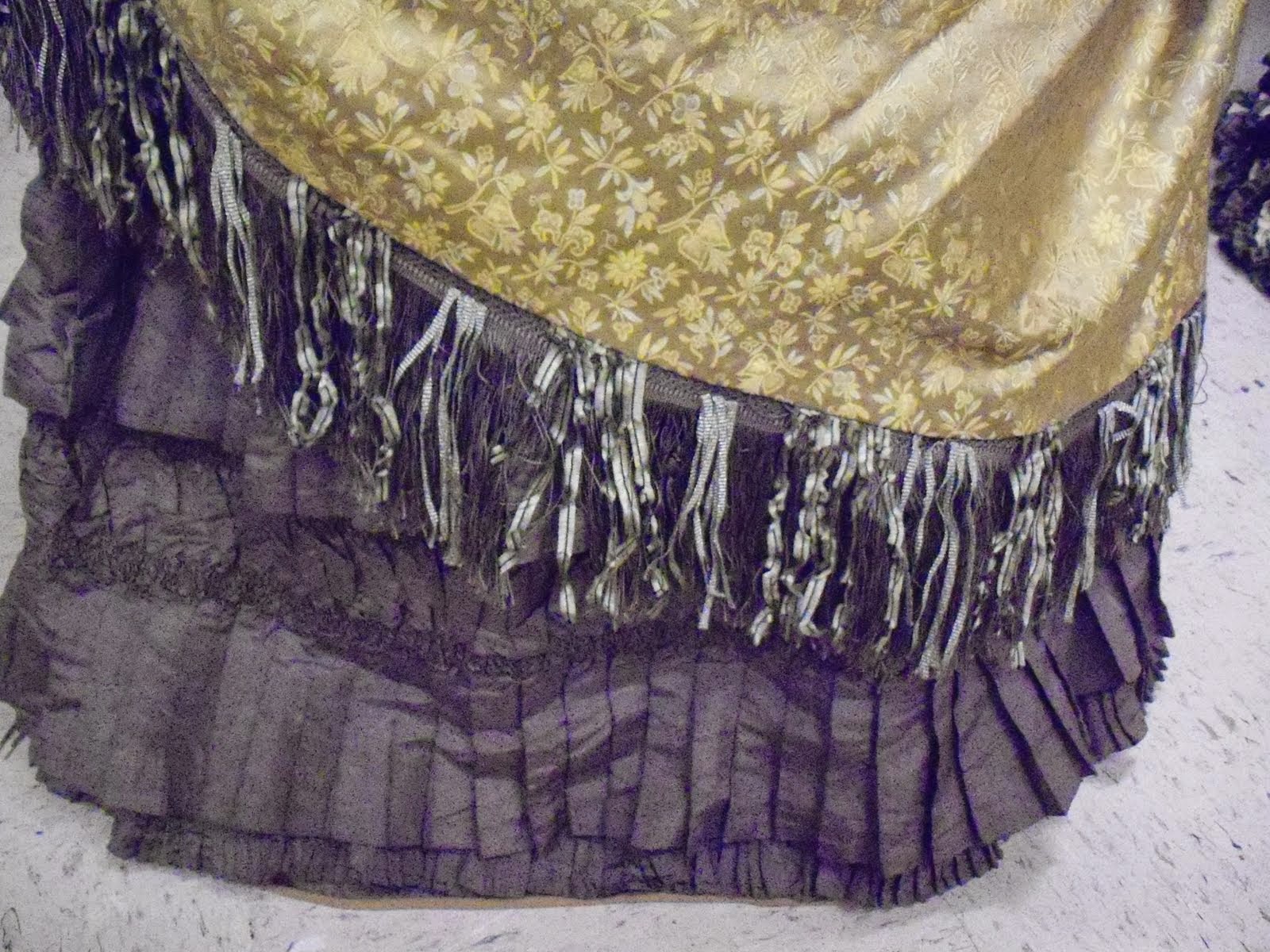 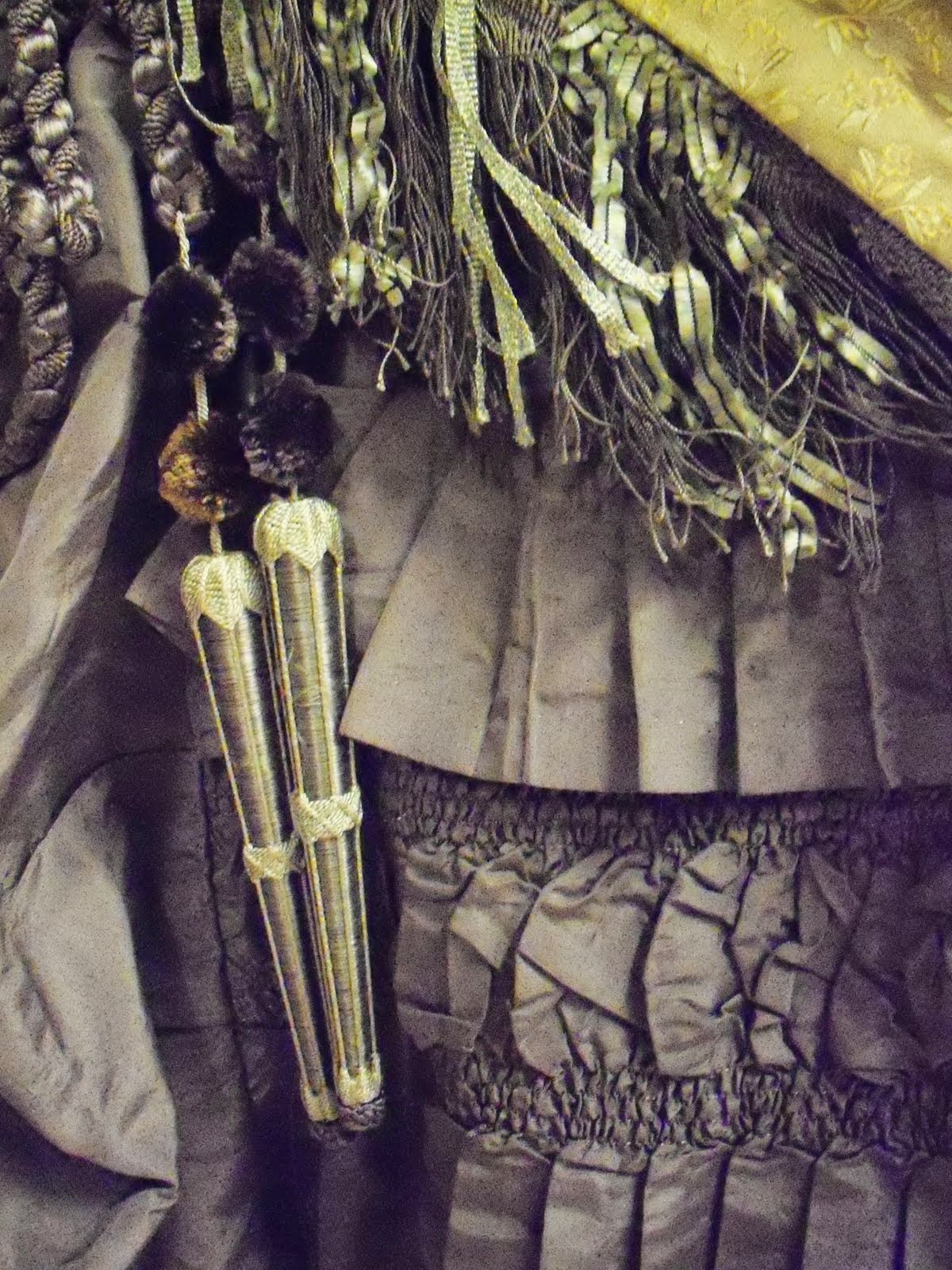 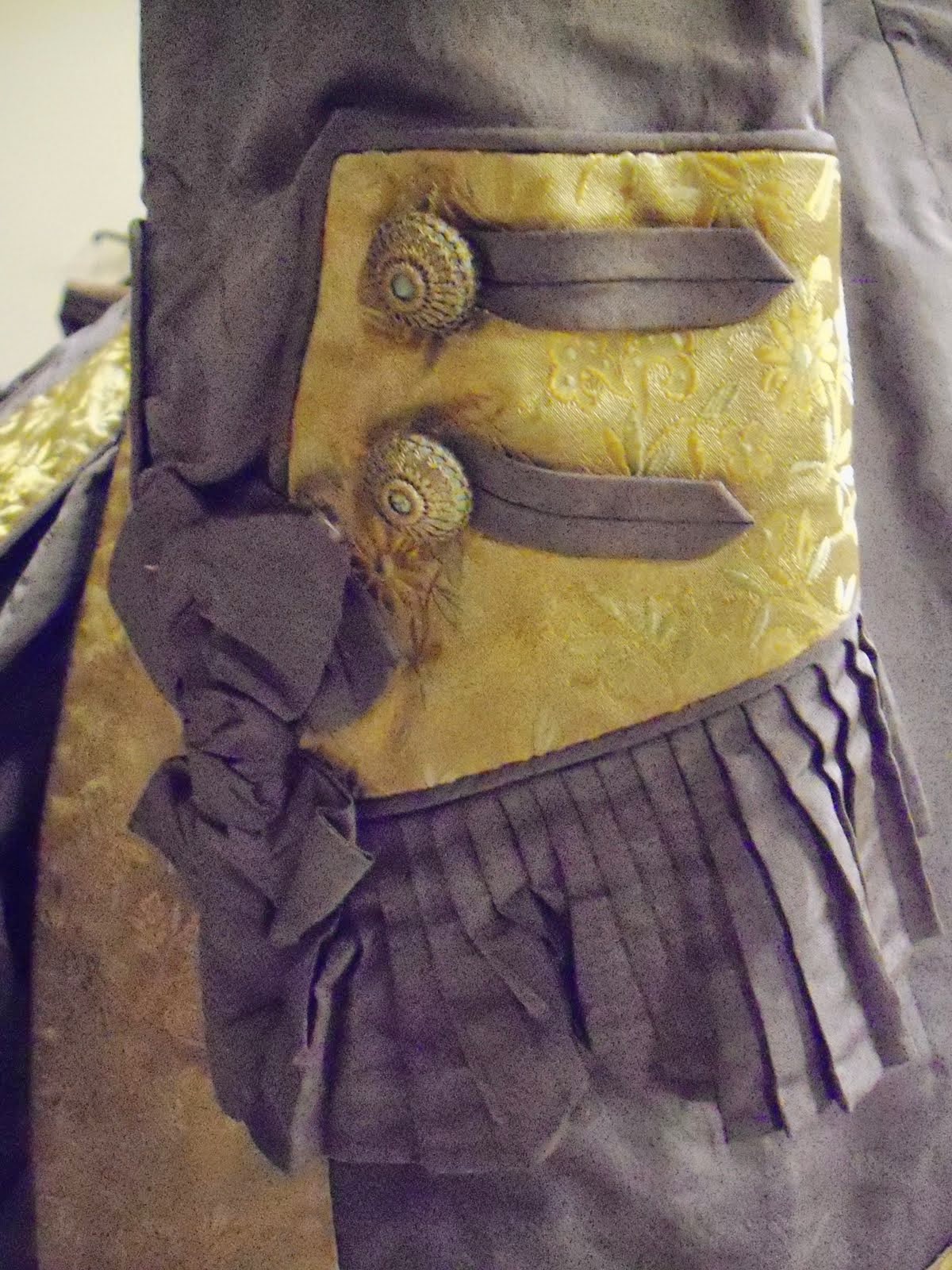 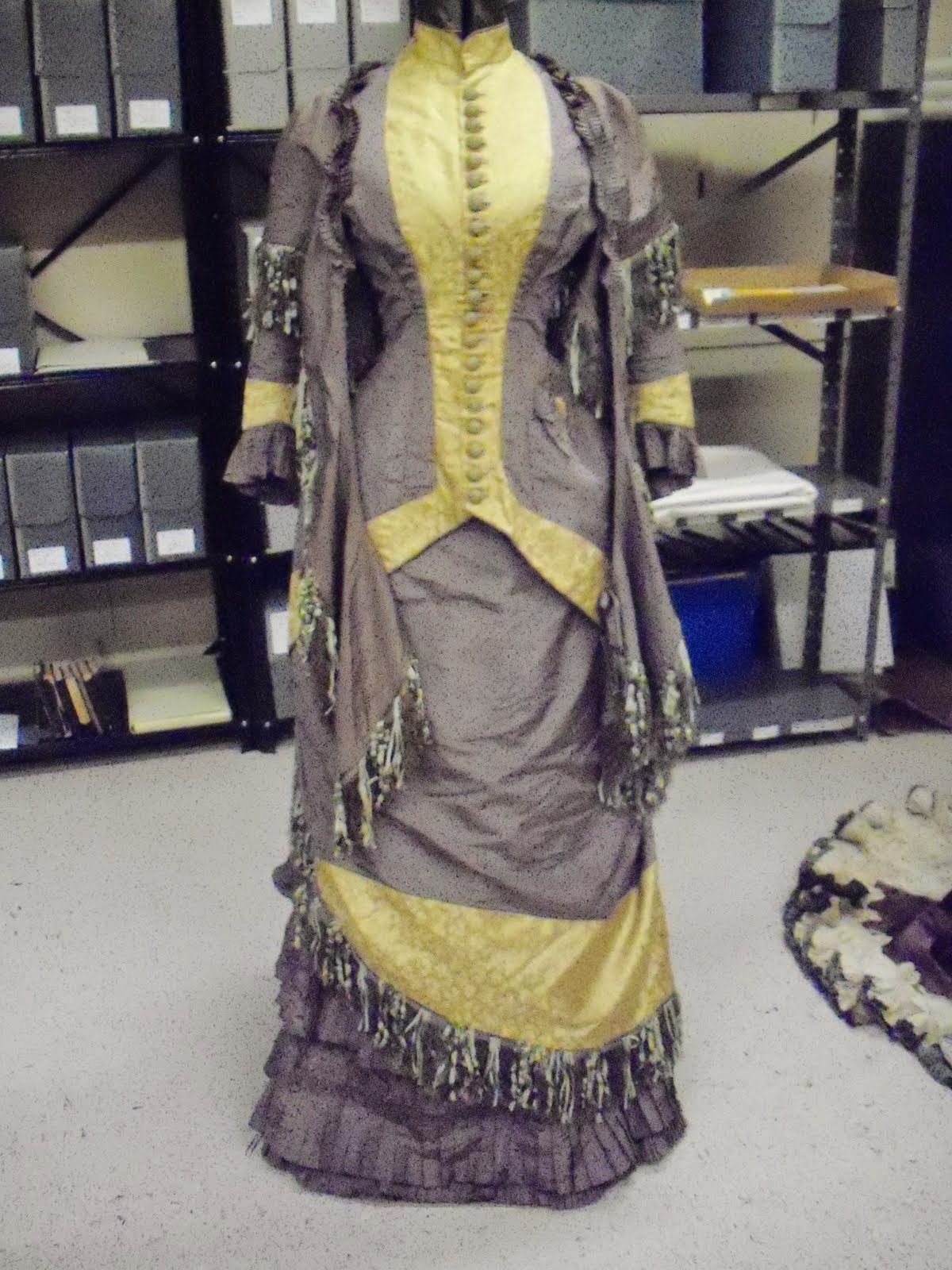 It was stylish for the mid- 1870s, appropriately luxurious for a “going away” dress.  Lily Belle's garment was also versatile – the train was detachable via buttons so the dress could easily be transformed for walking or a promenade. It is likely that the dress came with an additional bodice or jacket to complete the ensemble and, once again, add to flexibility.

The patterned gold silk of the bodice, as well as accents of gold on the cuffs and skirt were eye catching. The bodice emphasized her form, with a shimmering sensuality, interplaying with the rustle…swish… glide of the skirt and train. Indeed, it is interesting to note that despite the dark taupe - a color deemed appropriate for travel- accented with baby blue fringe, the sparkle of gold might have been perceived by some as too ostentatious.  One wonders if it would have met with the approval of Florence Hartley, for example, that purveyor of Victorian etiquette when she notes “If you are going to travel, have a neat dress and cloak of some plain color, and a close bonnet and veil. Avoid, as intensely vulgar, any display of your position as a bride, whilst traveling.”
(The Ladies’ Book of Etiquette…by Florence Hartley, courtesy Project Gutenberg: http://www.gutenberg.org/cache/epub/35123/pg35123.txt) 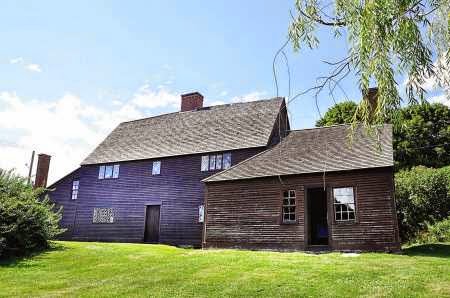 Our dear friends, Master & Mistress Spencer will be visiting with a picnic lunch - stop by and say hello! (http://www.anhistoricallady.blogspot.com) 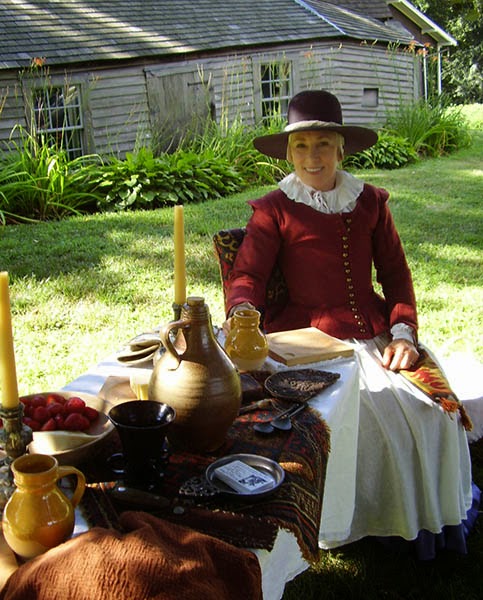 MORE:
Via Portsmouth Herald
Jackson Hill Cider Day offers look at the past
By Suzanne Laurent
news@seacoastonline.com
September 03, 2014 - 2:00 AM
PORTSMOUTH — Just off Maplewood Avenue sits the oldest existing wood-frame house in all of New Hampshire and Maine, overlooking a fragrant apple orchard.

The Jackson House (circa 1664) was built by Richard Jackson, a woodworker, farmer and mariner.  "They called those who built houses 'housewrights' back then," said Kathy Somssich, who is in her 14th year as a guide for the house overseen by Historic New England. "Seven generations of the Jackson family lived in this house."

Each September since 1995, the Jackson House has hosted a harvest festival in the orchard that slopes down to the outlet of North Mill Pond into the Piscataqua River. 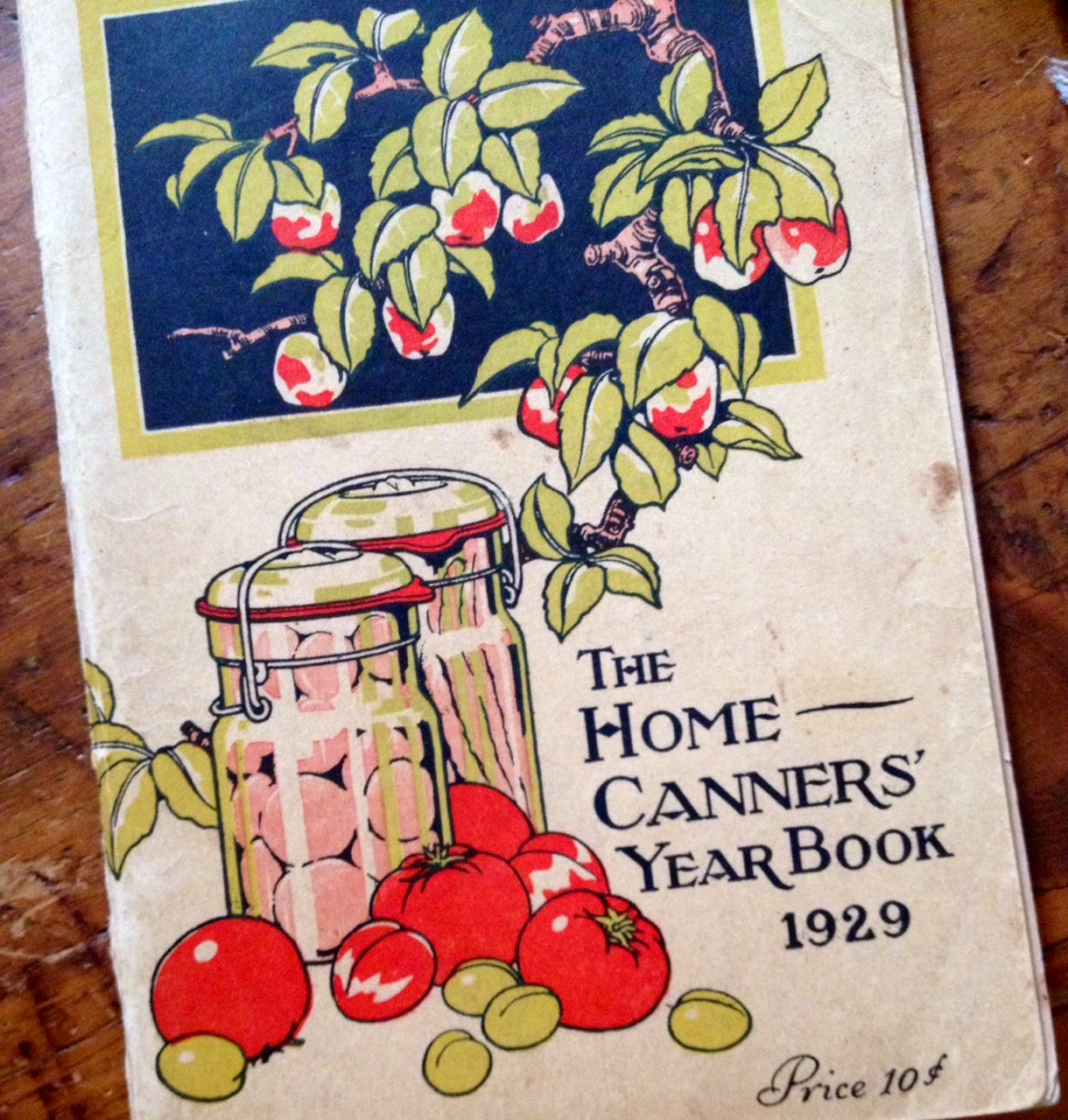 Whether your labors find you on a farm, in a factory, office or kitchen, today we salute those past and present who work to secure family and community.


Posted by SilkDamask at 5:36 AM No comments: