What Shoes Did Mistress Firebrand Wear?

I was asked by author Donna Thorland (www.DonnaThorland.com) to join her in an intriguing project: to consider what style of shoes her fictional heroine, Mistress Firebrand, would have worn as a popular actress on the New York stage in 1777. With Lauren, doyen of vintage shoes at American Duchess (www.AmericanDuchess.com)  we looked at a sampling below with a shoe giveaway in mind! (See details here:  http://www.donnathorland.com/shoe-giveaway/)

Given the character and the profile Donna shared, we agreed that we had some latitude for dazzle, sparkle and shine. The London and New York connections made it possible to consider a wide scope of footwear styles and materials. Some of the leading cordwainers (in terms of elite audience, skill, and high-end production values) who were in Georgian London and participated in active trade with New York and New England, would have been John Hose & Son; Thomas Ridout & James Davis, and William Chamberlain & Son. Bright yellow silk brocades and damasks, with metallic lace and silver threads, red leather Moroccan pumps or scarlet silk satins shoes, seemed appropriate candidates.  Visual clues, such as the expense of the accessories and textiles, would have been instantly understood by the audience.

The contenders were from several museum collections. And the winner is….. 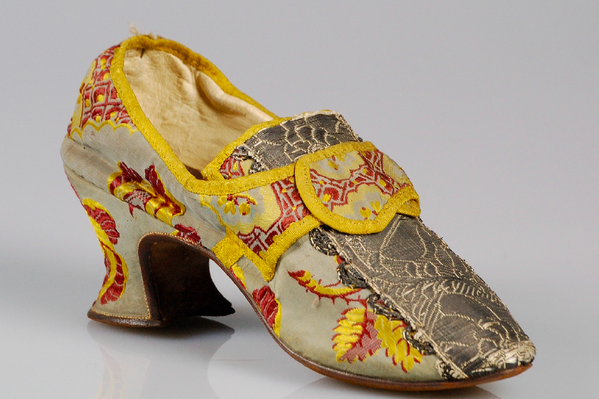 1) British (probably London made) silk brocade shoes, 1760s (?)
Yellow, with bright red creating an exotic “Chinoissere” effect. Not only would the silk have a shimmer, check out that wide band of costly metallic lace which runs from toe to vamp to throat. The thick expanse of lace (or braid) just shouted luxury.  These shoes would have been noticed anywhere! They are in the Metropolitan Museum collection; but this is the only view given – would love to see the heel. 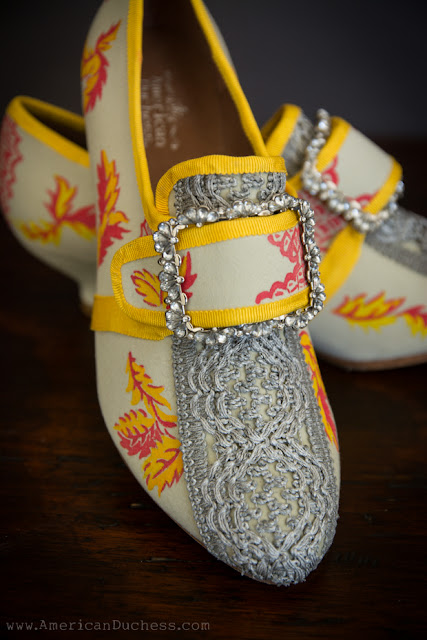 The runner ups were certainly keepers as well: 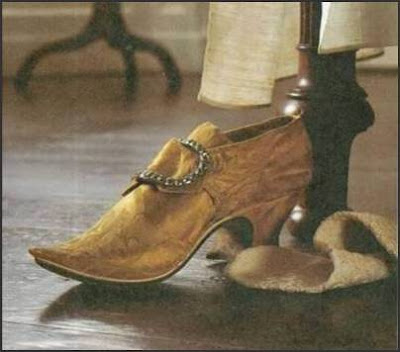 2) London-made silk brocade shoes, ca. 1760, are said to have been owned by Mercy Otis Warren. They are in the collection of the Plymouth Antiquarian Society. 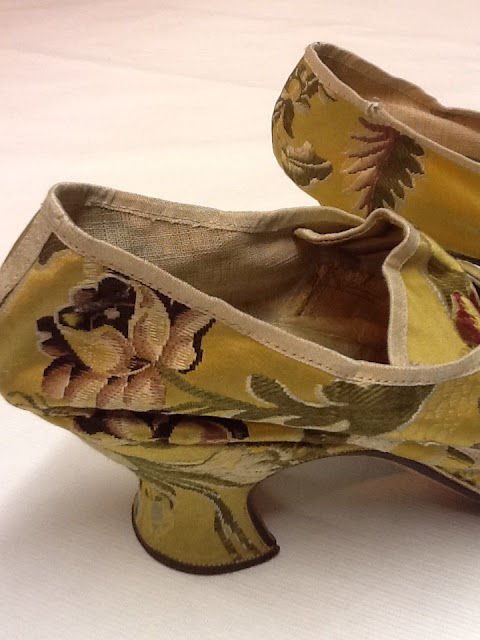 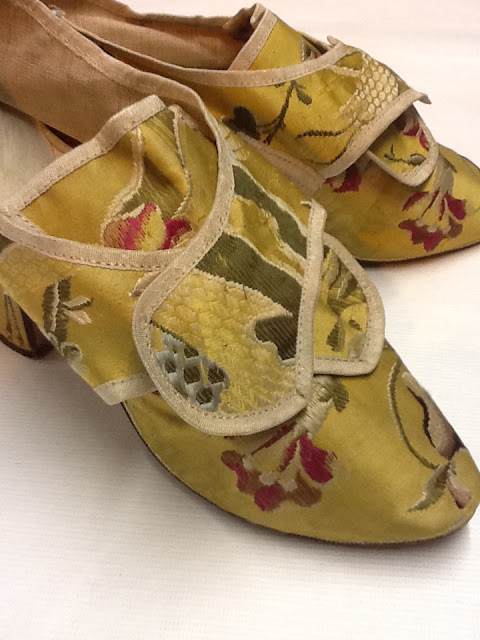 3.) Fabulous Rococo shoes by London cordwainer’s Ridout & Davis, who carried on their trade near Aldgate. These are in the collection of the Peabody Essex Museum. Mid 18th century, silk brocade. 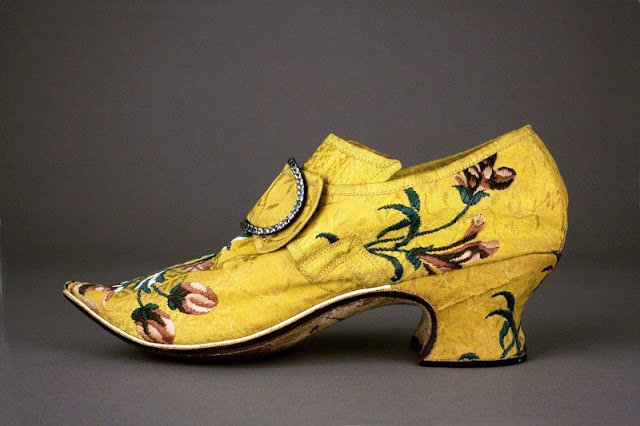 4.) Another pair by Ridout and Davis, these are in the collection of Colonial Williamsburg but hail from Maine. They are in fabulous condition. Mid 18th century, silk brocade. 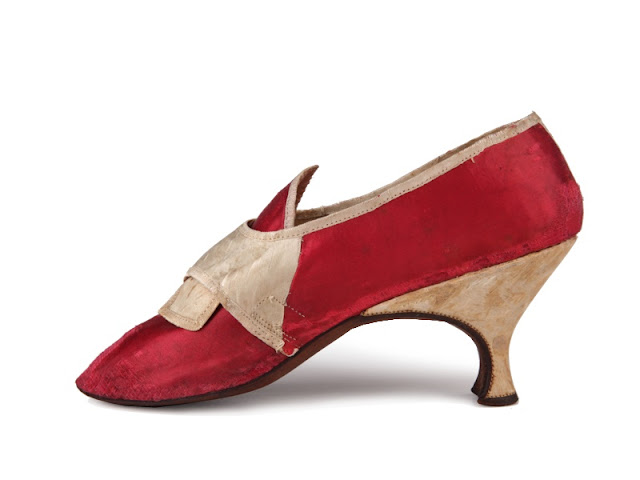 5) One of my personal favorites as we start to transition into the Neoclassical style – scarlet silk satin high white leather Louis heel shoes. Made by Chamberlain & Son, London c. 1775-1785. Via www.eng.shoe-icons.com 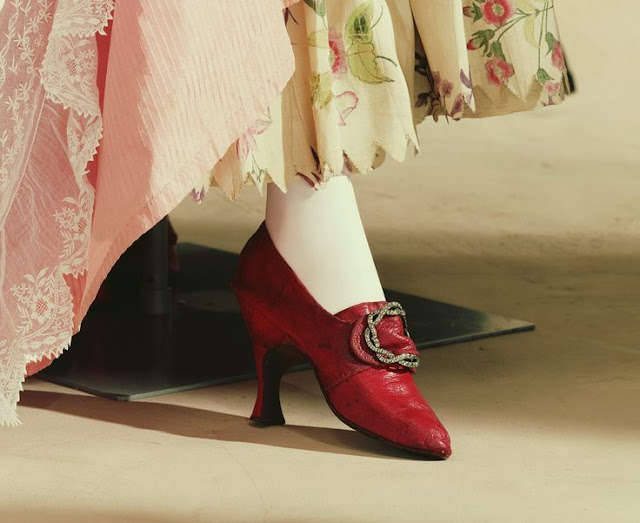 6.) This shoe is sizzles! Super high heel, red Moroccan leather. Kyoto Costume Institute. Not only would the high quality of the supple leather have conformed to the wearer's foot, the elegance of the higher-than-usual, slender Louis heel, would achieve the profile many women seek - then and now. Most likely French, c. 1770s-1780s.


British Occupied Manhattan, 1777.  American actress Jenny Leighton has been packing the John Street Theater with her witty comedies, but she longs to escape the provincial circuit for the glamour of the London stage. When the playwright General John Burgoyne visits the city, fresh from a recent success in the capitol, she seizes the opportunity to court his patronage.  But her plan is foiled by British intelligence officer Severin Devere….www.DonnaThorland.com

Men’s Heels: The Stirrup, the Spur and the Boot? (Part 3)


Part 3 The Heel
Equitation styles began to change in the early modern period. A number of factors may have influenced this transformation; changes in warfare, the growth of the Gentry and changes to inland transportation. Various causes existed and are worthy of study, but whatever the root cause, modern riding styles emerged that incorporated a shorter stirrup strap.  Riders began to sit with the upper leg thrust slightly forward and with the lower leg bending at the knee.  This type of equitation allows the rider to use the pressure from the legs to help guide the horse. It also brings the foot and heel closer to the flank of the horse, which allows the early-modern spur to be shorter than its medieval equivalent.   However, the modern English heel is much flatter and almost inconsequential in comparison to the Western heel.
As an aid in understanding the shift in heel and spurs, a remnant of that transition might be the style of the American Western heeled boot and the manner in which some cowboys wear their spurs. This style of placement has the spur resting on or near the top of the stacked heel, about 3 inches off the ground, which allows the spur to hit the flank of the horse closer to the underbelly with less arcing of the stirrup, leg and foot. Similar to the Western style, the spur for the English rider is placed on the boot several inches above the ground.

Additional factors for the development of the stacked heel for men could include the changing role of horsemen outside of the military in the early modern world and the increased use of horsepower.  Even the most shallow heel allows spurs to be worn both on and off a horse.  The lift the heel provides allows a rider to walk without damaging the spur's leather and without digging into the sole of the foot with each step. A thick sole and stacked heel provide some elevation in a world of animal muck, and from a practical nature it is far more effective to replace a worn outer sole and a layer or two of a whole sole.  While not a primary cause, one of the easiest ways to increase stature in a hierarchical society is through a raised heel.  Another side effect of leather soles and heels is that they make sound as we walk.

Heeled leather soled footwear announces a person’s approach before they ever enter a room and a boot creates more sound than a shoe. The sound shoes and boots make as a person walks is one of the very few approved ways to make noise through their clothing.  The development of a raised heel for men occurred during a period rife with personal wear and adornment no longer deemed appropriate for men; wigs, britches, lace, cockades, jabots, buckles, canes, swords are all anomalies to modern viewers. What we find odd might have been a more natural development in the 17th-18th centuries.  So while not to diminish the possible influence by the high heels of the Asiatic archers on Western male shoes, a far richer story might exist that incorporates a host of influences.

Men’s Heels: The Stirrup, the Spur and the Boot? (Part 2)


Part 2 The Spur
Even if our ancestors seemed to be concerned less with safety features than we are, the notion of riding a horse everyday with a total disregard for sensible riding is illogical.  It is a mode of transportation with inherent risks, not a roulette wheel of conveyance. An overlooked use of a heel is that it provides a place to mount spurs. Riders attempt to move their mounts with leg pressure against the flank. Some mounts respond to this and others do not. Spurs provide an extra level of persuasion. Without going into the barbarity of the practice, a good rider uses spurs only to get the horse’s attention, not to drive steel into the side of another creature.  That being said medieval spurs are long pointed prongs and I would not want to be the horse under a knight.


So why did men begin to wear stacked heels in the in the 16th century? The connection to 8th through 14th century riders seems a bit spurious, no pun intended. However, a result of the transition from medieval hand weapon warfare to modern gun warfare might have included the evolution of riding tack--the stirrup, the spur and the boot. The spur has been in use in European riding for at least two millennia. Images of mounted horseman from the medieval period show heel-less or nearly heel-less riders using long stirrup straps. Two examples from the late 14th century provide a glimpse of spurs and foot placement for riders without heels. The Livre de Chasse commissioned by Gaston Fébus, Count of Foix and dedicated to Phillip the Bold, Duke of Burgundy. Fébus was a renowned hunter so the depiction of riding positions and the accouterments of hunters would have been of vital importance to a sportsman of his stature. The rider’s boots appear to have no heels, but do wear spurs.   The other image illustrates a hunter with the standard riding position of the ball of the foot in the stirrup, but then he appears to be pacing, not pursuing.  In one of the images the huntsman in pursuit of the stag is riding with at least one foot in a ‘jamming it home” stance without the aid of heels.

These 14th century French noblemen for whom riding was a natural part of their existence, appear to be able to ride seriously without high-heels, but with the aid of stirrups. Although this is not an exhaustive study, these examples and other illustrations show medieval horseman riding with heel-less extended legs.  The length of the leg and the geometry of the human body determine the distance covered by this arc.  Due to the nature of the arc, a long strap stirrup may require a long sharp spur in order to compensate for an extended leg holding a stirrup in place rather than the effort going into the use of the spur itself.  From the extant images the size of the heel, if it existed, seems to be inconsequential to the medieval rider.
Part of this extension may lie in the construction of medieval saddles, which brace the rider from the front and back, thus giving the rider a very secure seat with the stirrups providing a secondary means of balance. This longer stirrup configuration may partly explain the use of the long pointed spurs favored by medieval riders. With a leg in full suspension the spur needs to be longer in order to achieve contact with a horse’s flank. Think of the stirrup as a weight and leg as a pendulum shaft, any movement is limited and dependent upon contact between the two objects, leg and stirrup. The rider’s leg and foot apply pressure that moves the stirrup in an arc.


The next installment will examine the heel.
Posted by SilkDamask at 7:38 AM No comments: