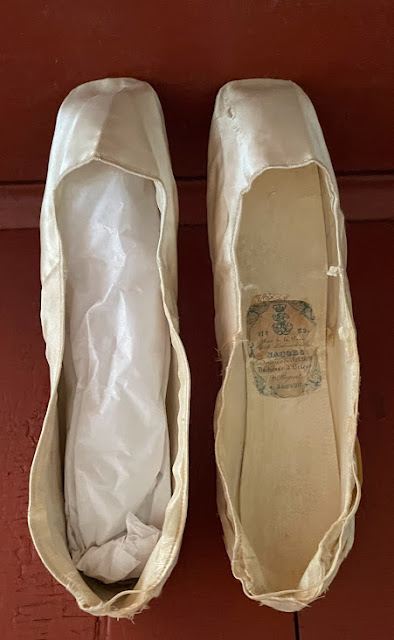 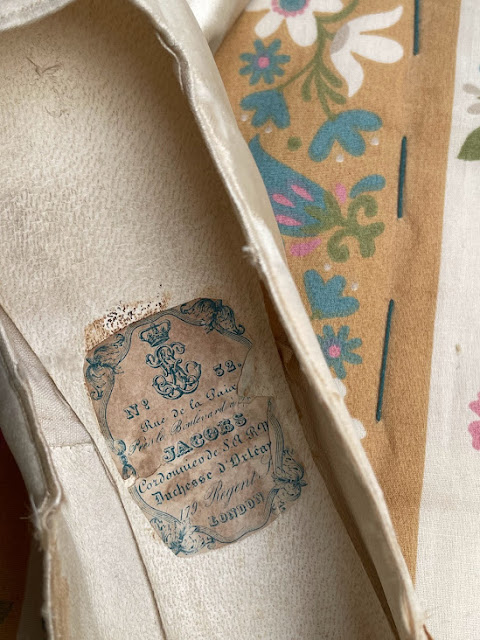 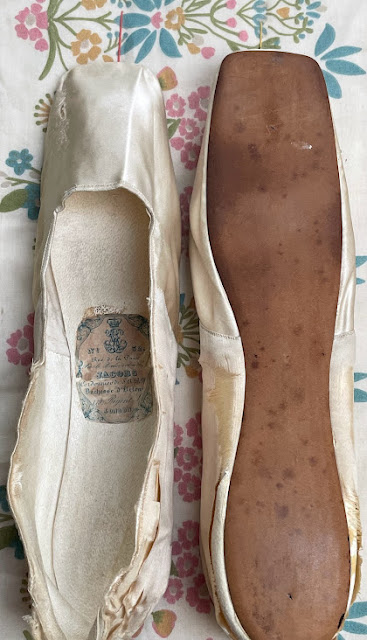 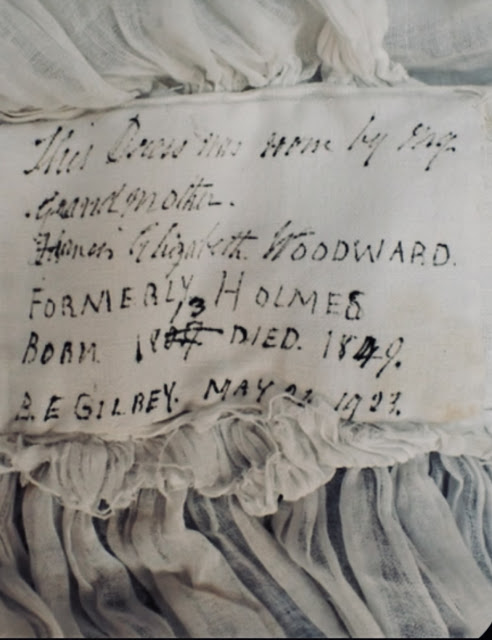 Posted by SilkDamask at 12:12 PM No comments:

I recently spent time trying to untangle some of the storyline and chronology for a box of Lane family textiles housed at the Stratham Historical Society, Stratham, NH.[i] The memories and names mentioned in aging handwritten labels seemed in need of clarification. After pondering the various and somewhat cryptic notes and using a variety of online and published sources, I am fairly comfortable with the identity of the wearer of these two charming child’s dresses and their maker: the dresses were worn by Olivia Emeline Lane (14 November 1825- 4 September 1905) and made by her mother, Hannah French Lane (1802-1841). 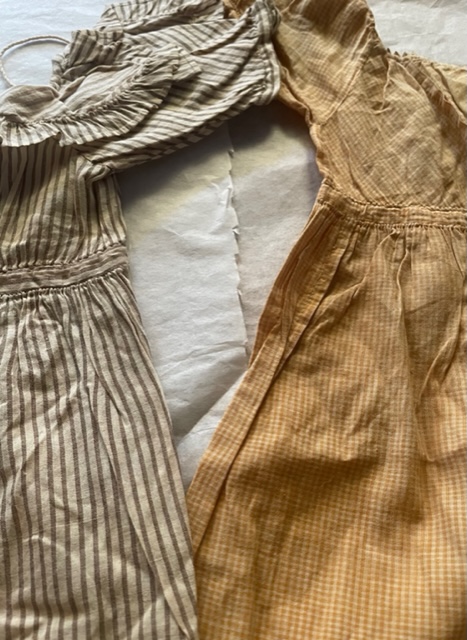 The two dresses exhibit design details found in dresses c.1825-1830s throughout New England and would be perfect for a child of three to seven or eight years of age, depending on size. Both dresses are entirely hand sewn, with high waists and bodice and sleeve flourishes. Simple drawstrings and buttons serve as back closures. 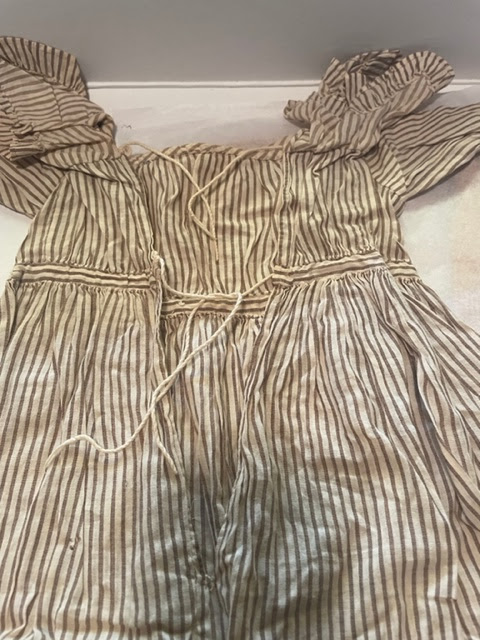 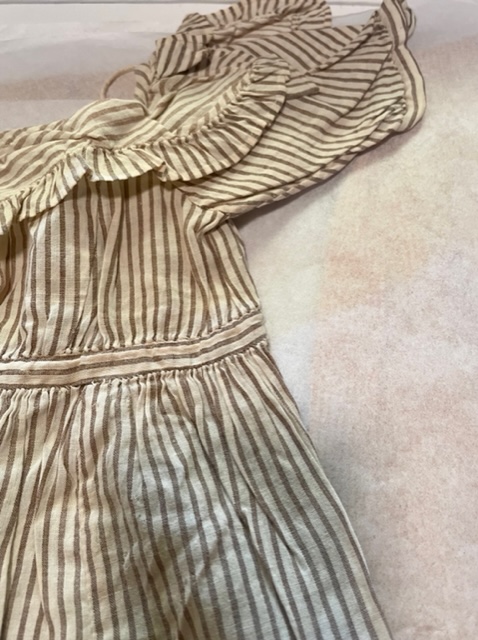 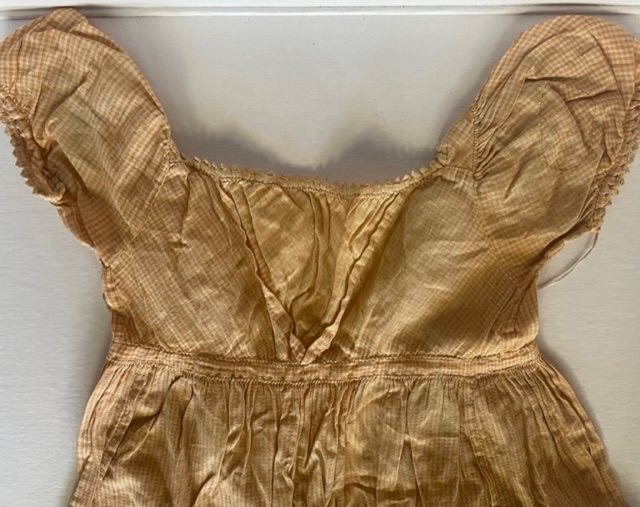 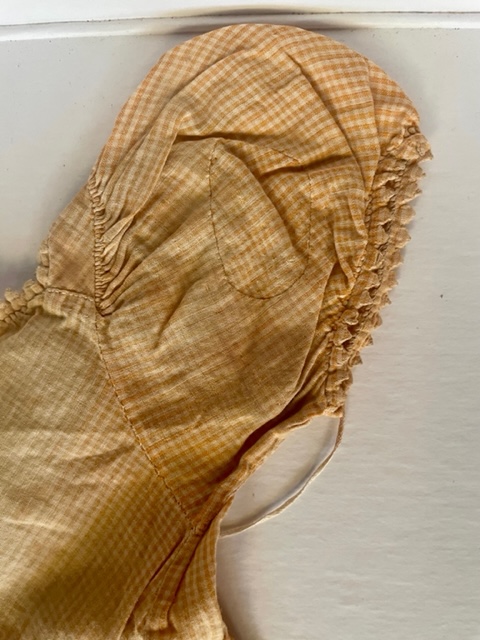 One features diminutive Van Dyck trim and a very skillful mending on the sleeve.

According to the family notes that accompany the garments, the textiles for the dresses were spun and woven by Olivia’s mother, Hannah. Close inspection of the fabric reveals slight imperfections and slubs indicative of home weaving. The likelihood that the material was homespun is furthered by the fact that Hannah was married to Charles Lane (1796-1884). Charles was a son of Jabez Lane and the couple likely lived in his father’s house. Jabez’s father was none other than the renowned New Hampshire shoemaker, Deacon Samuel Lane. Thanks to the work of scholar Jerald Brown and the efforts of the Lane family to preserve their family papers (housed at the New Hampshire Historical Society), we know that female members of Samuel Lane’s household produced flax and wove high quality linen.[ii] Their work was in demand at various market days. It is not unlikely that later generations retained the tradition, and perhaps the workspace.

After Hannah's death in 1841, Charles remarried. His second wife was Elizabeth Berry Lane, and it appears that her descendants preserved these very special items, as well as a ‘best bonnet’. 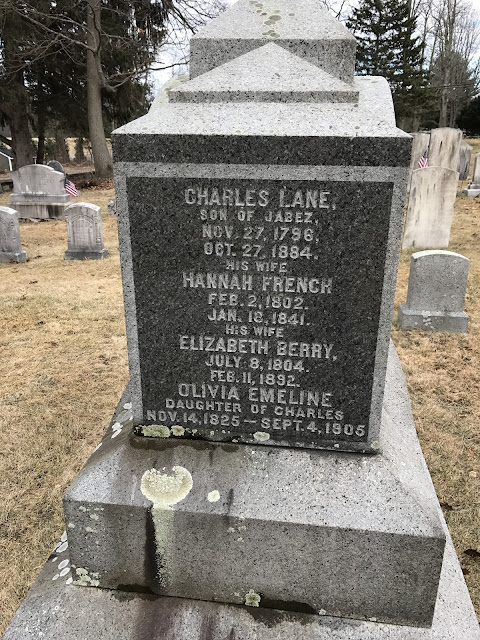 The author thanks Andra Copeland, Skip Stearns, Bruce Kerr and Teddie Smith of the Stratham Historical Society for their assistance throughout the summer of 2022.

[ii] For a guide to the Lane Family Papers at the New Hampshire Historical Society, see: https://www.nhhistory.org/object/272904/lane-family-papers-1727-1924.

For a comprehensive account of Samuel Lane, see Brown, J. E., & Garvin, D.-B.. The Years of the Life of Samuel Lane, 1718-1806: A New Hampshire Man and His World. (Univ. Press of New England, 2000).  For an account of Lane and additional 18th century New England shoemakers and their business, see Alexander, K., Treasures Afoot: Shoe Stories from the Georgian Era (Johns Hopkins University Press, 2018)

Posted by SilkDamask at 10:39 AM No comments:

A little fashion myth busting - not all women had small feet. Museum and family collections are skewed toward small sizes for a wide variety of reasons but careful research and observation tells a more balanced story. For example, here, a woman’s roughly size 10 to 10.5 (by current American sizing) dancing slipper in the classical ‘sandal’ style, was worn c1820s in Maine. Green kid leather and silk, with silk ribbon ties from the collection of Old York Historical Society. 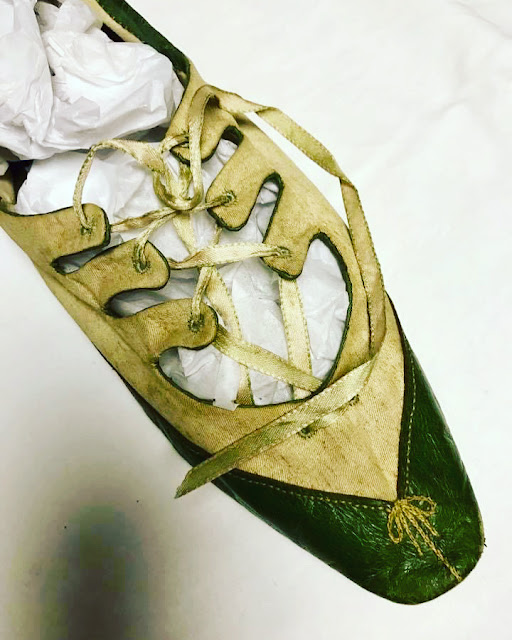 Posted by SilkDamask at 2:43 PM No comments:

“I have labored very hard to keep up courage....": Logbook Entries From An Unidentified Female Hand 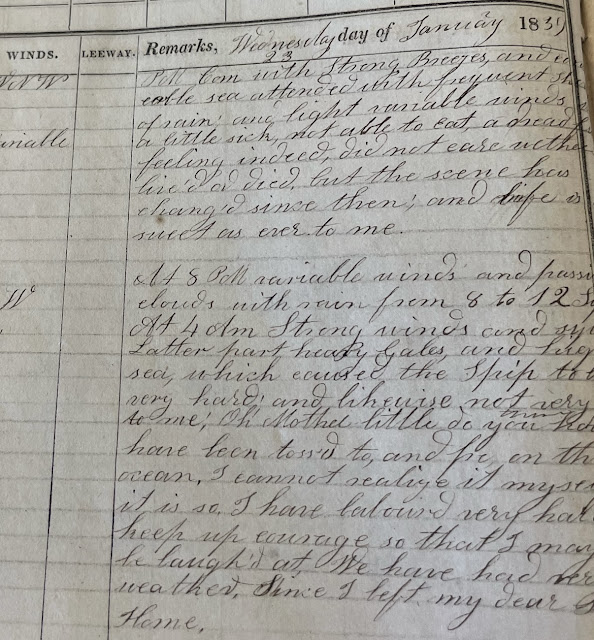 This summer, I have been researching account books, day books, ledgers and logbooks at the Phillips Library and found the following of interest. The first part of the log is from a logbook kept from Boston to Havana on the Bark Altorf with Captain Snelling, 1845-46.

Then, at the back of the logbook is an earlier journey from Boston to New Orleans on the Ship Victoria. This voyage begins in 1839 on Sunday 20 January and the log entries are written by an as yet unidentified female hand, possibly the ship captain's wife or the first mate's wife. [Ship Captain’s Wife’s Logbook/Journal 1839, Log 1145, Phillips Library, Peabody Essex Museum] Typically throughout the day or watch, she records the weather, the wind, the sea swells and any unusual occurrences as one would find in comparable logs. There are many unanswered questions about the author of this portion of the logbook but what caught my interest was the uncommon role an unnamed female played in the trip. Three days into the voyage, on Wednesday 23 January, she expresses her fears as she confides:

“I have labored very hard to keep up courage so that I may not be laughed at. We have had very bad weather.[sic] Since I left my dear sweet home.”

It has been fascinating to follow her through terrible seasickness [“I cared not if I lived or died”] to feeling hale and hearty [“everything tastes good even the salted beef” she reported on Sunday 10th of February]. In addition to gaining her sea legs, she eventually feels comfortable above deck knitting, mending, drinking tea or reading her Bible.

I’m not sure what I will be doing with entries such as this, but it does help me with understanding a wider range of female authorship and voice, which is the current focus of my next two book projects, one set in the late 18th century and the other, in the early 19th. 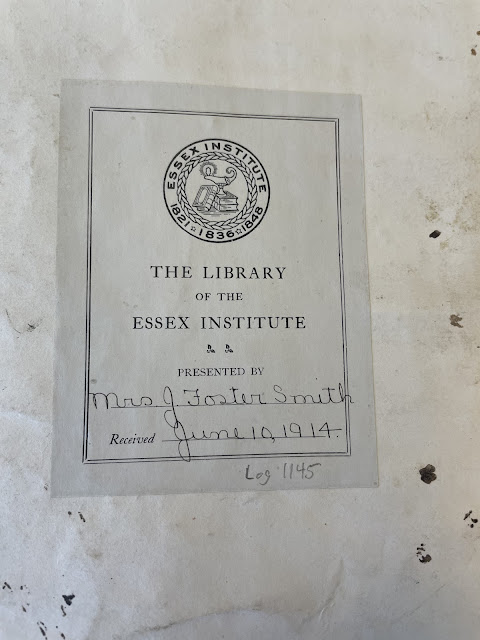 Posted by SilkDamask at 9:15 AM No comments:

Rachel Adams and Fragments of Her Embroidery, c. 1789

Tucked away safely in a dresser drawer in the Stone School Museum of the Newmarket Historical Society (New Hampshire) are several fragments of what were most likely bed hangings (the donor notes for a canopy bed), made of homespun, hand-woven linen and embroidered with delicate floral motifs, predominately in shades of blue. 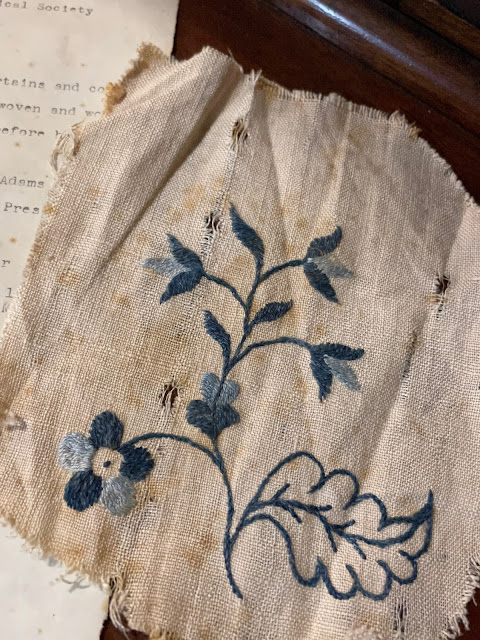 The four small pieces of well-worn textiles were donated to the Historical Society on February 14th, 1968 by a descendant of the maker who “vouched for” its authenticity. The label which accompanied the gift notes that the textile was “spun, woven and worked by Rachel Adams of West Medway before her marriage. About 1789.” Her father was Revolutionary War officer, Captain Moses Adams. 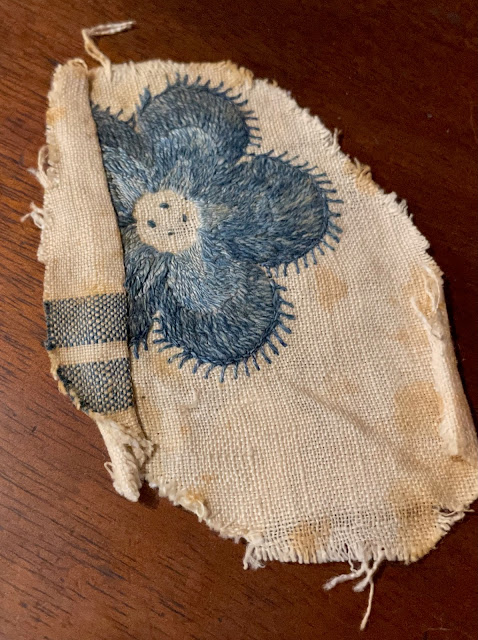 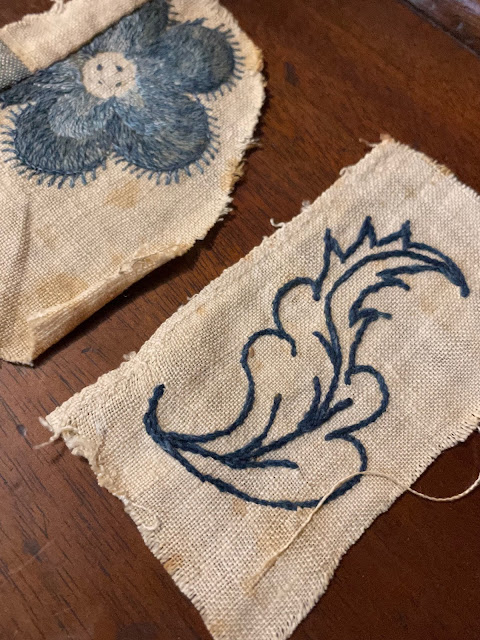 Although there remain genealogical issues to work out, the details regarding the actual textile align – the use of small scale motifs and limited palette certainly reflect the visual aesthetics of the last quarter of the 18th century. Further, the tradition of ‘going to housekeeping’ meant that many females of the time created useful household items related to bedding to take into their new home after marriage. 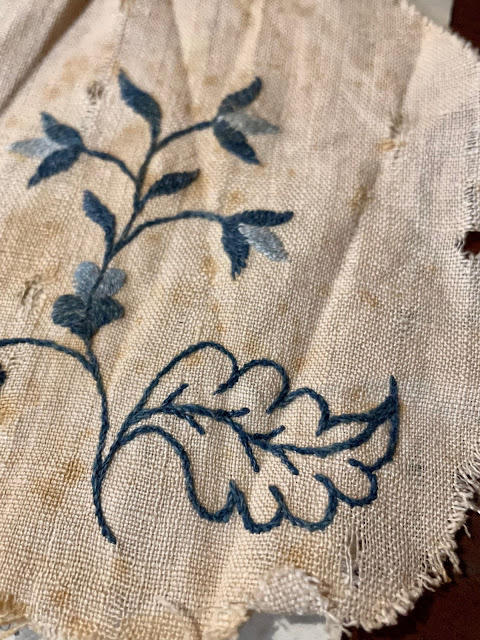 All photos by the author; courtesy, Newmarket Historical Society

Photographer Jacques Henri Lartigue captured the French elite at play - whether at motorcar racing or at fashionable promenades.

His work capturing fashion may be seen in numerous examples, such as "Carriage Race Day, Auteuil, Paris, 1911" 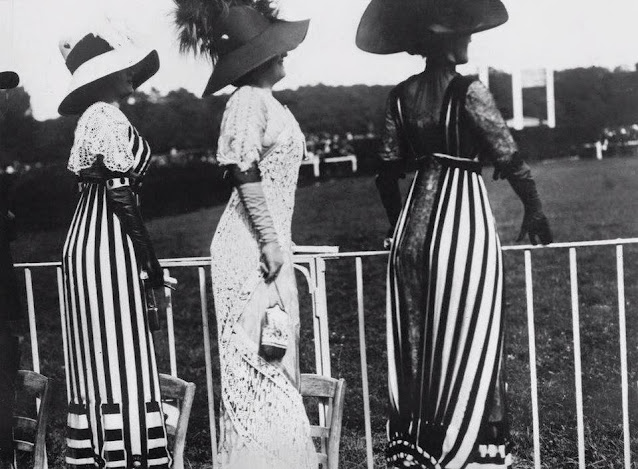 Hats, gloves and beautifully designed silk dresses were on display. For a comparison, see a striped silk afternoon dress, c. 1912 by Jeanne Hallee - it is a perfect complement to Lartigue's photo from Race Day. 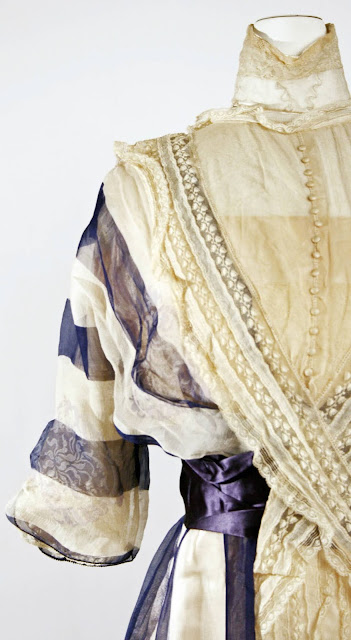 For more on the Hallee dress, see http://www.metmuseum.org/art/collection/search/94861…

And more stripes – Paris street style in 1912, photo by Lartigue 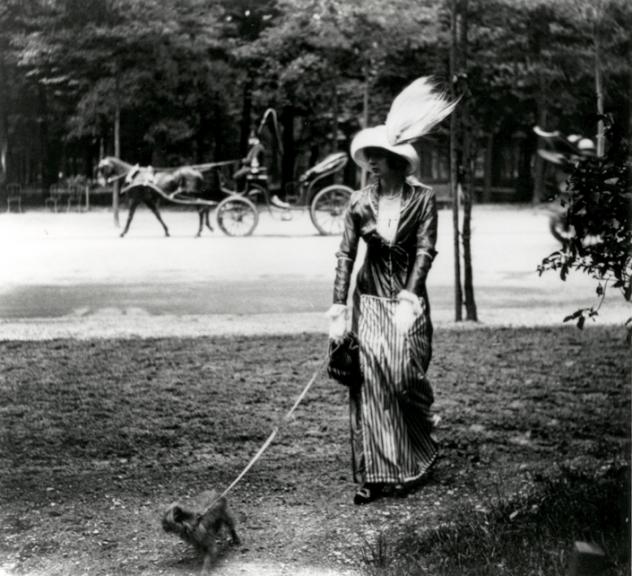 Lartigue's images here capture a pre-WWI moment -- a world which will soon experience a crippling war and a devastating pandemic.

Posted by SilkDamask at 7:57 AM No comments: 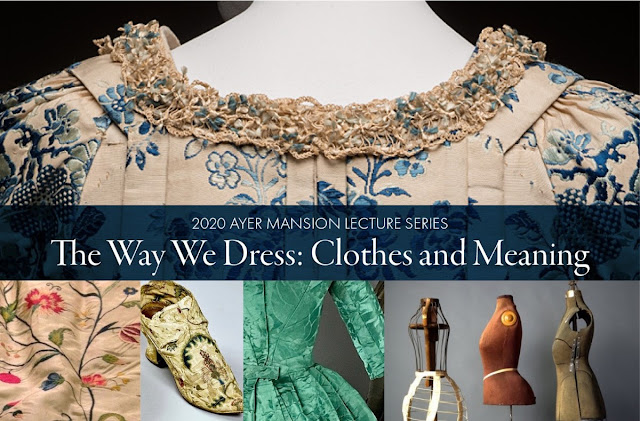 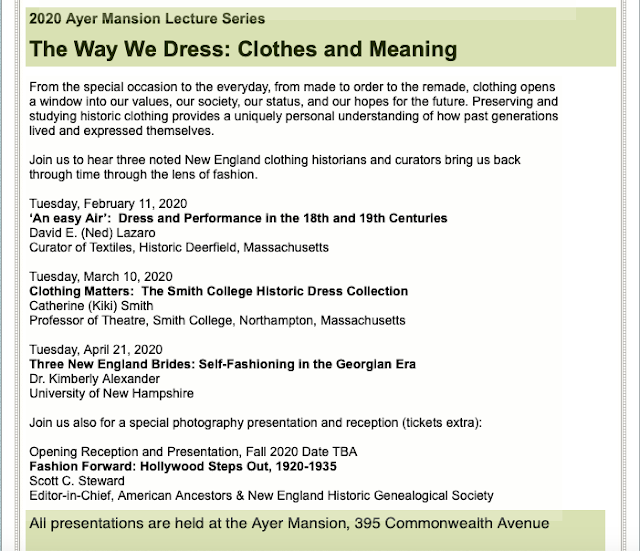 Posted by SilkDamask at 6:18 AM No comments: