General Montogmery’s Store, 24 March 1793, Haverhill, NH
What was happening in the small court town of Haverhill, NH. on this day in 1793?
It was a Sunday, and there were no purchases at General Montgomery’s store that day. Most of the townspeople were attending the Congregational Church, where Reverend Ethan Smith was delivering his sermon. General Montgomery (1764-February 21, 1825) and his family were seated in pews on the first floor; his store clerks in the gallery. [1]
Reverend Smith had visited the General’s shop two days earlier day to purchase “1 chamberpot” and "1 sugar bowle."  In subsequent visits, Smith's acquisitions are, not surprisingly, modest, given his remuneration from the congregation who supported his work.  For example, on April 1st, he acquires items important to his ministry – paper and ink powder –  along with an ivory comb, for the sum of 2 shillings. [2]
Even the wealthiest man in town, General Montgomery, would run afoul of the church leaders, for riding on the Sabbath, and was called upon to ask forgiveness.  Church records observed that: "Brother John Montgomery sent in a confession to be read in public for his transgression in riding on two occasions on the Lord's day, with humble acknowledgement of his sin which was accepted. "
On the following day, the shop was open as usual, ready to supply the townspeople with nails, grains, textiles, leather, buttons, coffee, and spirits. 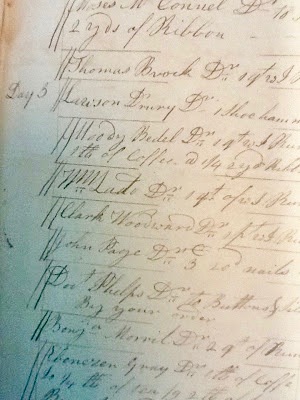 The material in this post is from my next book project.
1. General Montgomery’s 1825 Grafton County probate inventory records that he held one pew (No.4) in the South Meeting House, lower floor, valued at $30.00 and also one in the gallery (No. 25) valued at $4.00, most likely for his clerks or apprentices.
2. Rev. Smith was installed as pastor on 25 January 1792 and his requested "dimission" was in 1799. While gathering many new families to the Church, Rev. Smith's tenure was not with its troubles. Indeed, he was considered to be relatively strict and unyielding in his expectations.
The townspeople were taxed £40 for Rev. Smith’s ministry and some would not pay this tax, citing the fact that the church was catering to the Piermont side of the town, among other reasons.

Posted by SilkDamask at 9:09 AM No comments:

Throughout history, garments have been handed down to be worn in different contexts or to be used as materials to create something new. Join us for a panel discussion on the history of reuse and refashioning as well as how designers today are using secondhand clothing or previously disposed of material in new ways. Our panelists are some of the most creative people in the study of material culture and the design world.
Linzy Brekke-Aloise teaches at Stonehill College where she specializes in United States history between the American Revolution and the Civil War. Her research focuses on consumer and material culture, and the intersection of fashion and capitalism in the Early Republic. She consults with museums and historic homes such as Mount Vernon to interpret the period of the nation’s founding. She is working on a book that explores science, gender, and the struggles of women to gain acceptance at Harvard University. She serves on the standing committees of American Studies and Gender Studies and is the program director for Gender and Sexuality Studies. She received her PhD and MA from Harvard University   and her B.A. from Mount Holyoke College.

Jay Calderin is the author of Form, Fit, Fashion, about which the LA Times said, "a new fashion bible for designers, aspirers and the just plain curious, this tome contains all the secrets." His second book, Fashion Design Essentialswas published in 2011. Calderin founded Boston Fashion Week, and has served as the organization's Executive Director since 1995. In 2012 he was appointed Creative Director of the first Chengdu Fashion Week in China. His work as a fashion designer has graced the pages of Vogueand Ellemagazines. He held the office of Regional Director of the Fashion Group International of Boston (FGI Boston) from 2009-2010, and has served on the Design Industry Group of Massachusetts (DIGMA) Design Advisory Council since 2008. He is an instructor and the Director of Creative Marketing at the School of Fashion Design in Boston. He also teaches at the Museum of Fine Arts, Boston, and the Massachusetts College of Art and Design.

Michelle Tolini Finamore is the Penny Vinik Curator of Fashion Arts at the Museum of Fine Arts, Boston. Books include Gaetano Savini: The Man Who Was Brioniand Hollywood Before Glamour: Fashion in American Silent Filmand a co-author of Jewelry by Artists: In the Studio, 1940-2000. She has taught courses on fashion, design, and film history at the Rhode Island School of   Design and Massachusetts College of Art and previously held posts at the Costume Institute at the Metropolitan Museum of Art and Sotheby’s auction house. She has curated #techstyle, Hollywood Glamour: Fashion and Jewelry from the Silver Screenand Think Pinkat the Museum of Fine Arts, Boston, Cocktail Cultureat the Norton Museum of Art; Driving Fashion: Automobile Upholstery from the 1950sat the Museum at FIT; and assisted with Jacqueline Kennedy: The White House Yearsat the Metropolitan Museum of Art. She received her PhD from the Bard Graduate Center in New York.

Pete Lankford is the Design Director for Timberland Boot Company. He has been designing footwear since 1993. In that time, he moved from a small start-up firm, through Converse, to Timberland, where he has been since 1998. Throughout this time, Lankford has been interested in hard, science-based research, focusing on the precise bio-mechanical tweaks that   make a better shoe.

Kimberly Alexander teaches museum studies, material culture, American history and New Hampshire history in the History Department of the University of New Hampshire. She has held curatorial positions at several New England museums, including the MIT Museum, the Peabody Essex Museum, and Strawbery Banke. Her most recent book, Treasures Afoot: Shoe Stories from the Georgian Eratraces the history of early Anglo-American footwear from the 1740s through the 1790s. She is the guest curator for Fashioning the New England Familyat the MHS and is writing the companion volume for the show. She received her PhD and MA from Boston University and her BA from Colby College.
Posted by SilkDamask at 10:44 AM No comments: