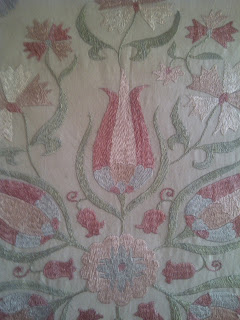 Suzani is a type of embroidered decorative tribal textile made in Tajikistan, Uzbekistan, Kazakhstan and other Central Asian countries. Suzani is from the Persian “Suzan” which means needle. While suzanis typically have a cotton base, the backing is frequently of silk, which is then embroidered with silk or cotton thread. The primary stitches used are the chain, satin and buttonhole.  Couching (decorative thread laid on fabric in a raised line, which is then stitched in place with a second thread) is also frequent. Suzanis are often constructed in multiple pieces that are then joined.

The oldest surviving suzanis are from the late 18th and early 19th centuries, but it seems likely that they were in existence long before that, based on historic detailed descriptions of embroideries that were probably forerunners of the suzani, dating back to the 1500s and Silk Road trading. Tradition maintains that suzanis were made by Central Asian brides as part of their dowry, and were presented to the groom on the wedding day. Among the most frequent design motifs are flowers, such as tulips and carnations, leaves, vines and fruit, and sun and moon disks. Fish and birds are less common.

In preparing this post, which was generated by a chance purchase of suzani shoes in Newburyport, MA. (see forthcoming), the author discovered a rich trove of on line information about both historic and contemporary suzani.

A suzani sampler is below:


The author thanks Nina of Meyra (www.meyraus.com) in Newburyport, MA. for sharing her knowledge of, and interest in, suzani textiles.
Posted by SilkDamask at 7:02 AM