Approximately a dozen typescript letters (source unknown) written primarily by Myra Montgomery (October 1, 1794-April 14, 1817)  to her cousin and subsequently, fiancé, Horace Henry Goodman (December 22, 1785-January 3, 1849) survive in the Collections of the Haverhill Historical Society, Haverhill, NH. Although small in number, the letters nonetheless constitute a valuable source of information on a relatively affluent young woman in the early Republic. While living in a rural town, she had access to much wider intellectual, artistic and literary circles, through her Boston education at the progressive Mrs. Susanna Rowson's School and due to Haverhill's role as the seat of the North County Court system, which attracted several hundred individuals throughout the year.

This short excerpt is part of a larger article on her life and letters, which have never been published. Portions have been presented in academic symposia over the last decade.

"....When you were here I did not think I should find a black canton crepe gown necessary, but it will be very useful for common wear & I have enclosed what I suppose  is sufficient to purchase seven yards of an ordinary quality at least. I have been informed that they are very low."

Her mother had died just five weeks earlier on April 21.

The use of the black Canton crepe (or crape) for a "common wear" gown, would have been in keeping with the transitional neoclassical into regency style of the time. The knowledge of current high style fashion is further supported in the family silhouette, seen above. Note the wide set sleeves, square cut bodice and emphasis on the high Neoclassical waist, gathered just below the bust. The dress is offset by the elegant standing white lace "collar" with ribbon, her curled and well coiffed hair (perhaps with a center part), sporting a hair comb or accessory. With her hair piled high, gathered at the crown of her head, neck exposed and the cut of the dress, the profile is long, simple and elegant.

In her next letter, she thanks Horace very much for the trouble he took to get the fabric but notes that it was not enough and she has asked Mr. West to procure some more. Mr. West was her brother-in-law and had a shop on Long Wharf in Boston. Horace had recently joined him in partnership. Indeed, the direct connection to goods coming to wharves of Boston and finding their way to northern New Hampshire within a matter of days is of interest and is oft repeated in the letters between the young couple.

The death of Myra's mother, Elizabeth Ring, foreshadows her own: Myra became ill in November of 1816, and succumbed to consumption almost exactly a year after her mother's death. She died on April 14, 1817 in the house where she lived most of her short life. The importance of Horace's Boston business is in strong evidence: as her illness took hold, he sent Maderia wine and fresh oranges in the hope that Myra would recover.

You can visit Myra's burial site, along with that of her father, General John Montgomery, her mother and step mother, Patience, at the Ladd Street Cemetery, not far from where her home still stands along the Oliverian Brook at the junction of Routes 10 & 25 in Haverhill, NH. 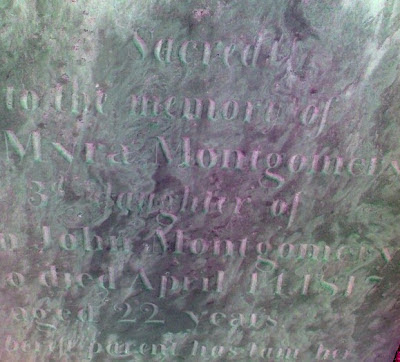 Further Reading
Sources on Neoclassical and Regency garments is extensive and widely available on line and in print.

A personal favorite is Ackermann's Repository of Fashion, first published in 1809.
Posted by SilkDamask at 6:01 PM